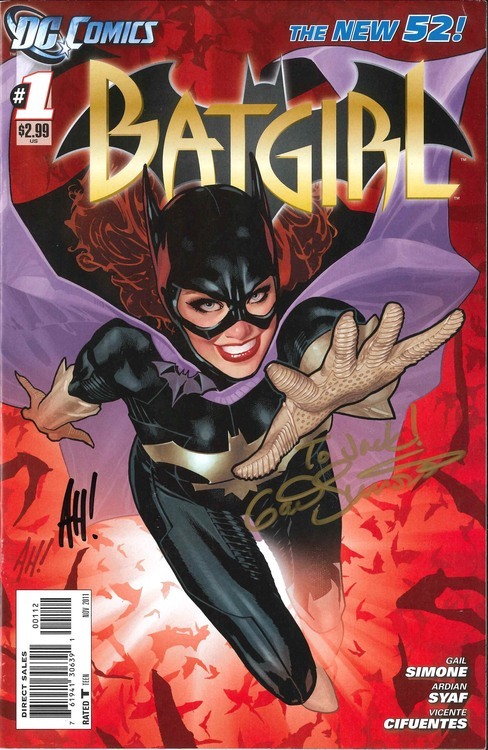 Barbara Gordon tosses her rusty wheelchair aside to become the high-flying Batgirl once again! 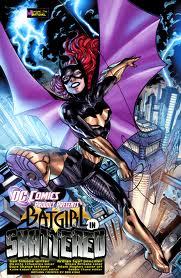 Having spent years unable to walk thanks to a bullet from the Joker, a risky treatment was able to restore Barbara’s legs. In this issue, we witness her triumphant return to the skyline, as she saves a family from a home invasion, injuring one of the intruders with a batarang.

The intruder is then taken to the hospital, where he becomes the target for new villain the Mirror, forcing Batgirl to protect him. But when the Mirror aims his gun at Barbara, she is frozen at the sight, recalling her traumatic experiences which flood her brain. The Mirror pushes his victim out the window, as on-lookers blame Batgirl for doing nothing.

Like many Barbara Gordon fans, I miss her as Oracle. When I heard that they were restoring Barbara to the role of Batgirl, I was saddened to think of losing Oracle, who, by being one of the most high-profile disabled characters, helps diversify comics. I still miss her, I really do, BUT I was willing to reserve my judgement until I read this series. And it’s damn good.

It sucks that Oracle is gone, but DC made the right decision by entrusting the post-crippled Babs in the hands of Gail Simone. One type of diversification was removed, yes, but Gail Simone gives us another with Batgirl’s restoration; Barbara Gordon as victim/survivor of trauma. Most characters in comics have horrible things happen to them, and they shake it off for the next adventure, because there’s crime-fighting to be done, dammnit! Gail Simone maintained the trauma that Barbara sustained…it happened to her. It wasn’t erased. She can never get away from it. It was a violation, and it haunts her. 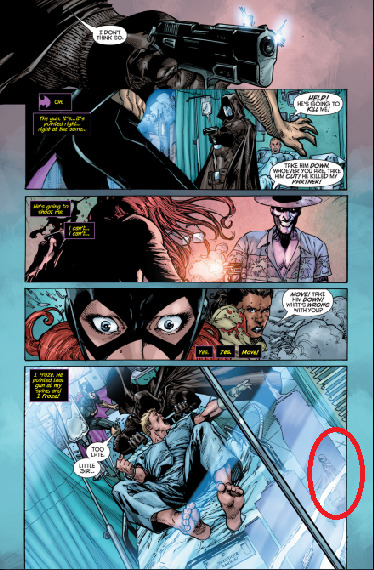 That’s unusual for a comic book. Treating violence very seriously. I’m a member of a board for a women’s shelter, and I hear stories that resonate with this from trauma survivors a lot. I think a lot of real people could relate to this character now. Yes, comic book magic gave Batgirl back her legs, but there is nothing magical about the repurcussions. Barbara is still affected by the event, still tormented by it. That’s a comic mimicing reality right there, folks.

(P.S. the picture above has Pandora circled, because I was too lazy to scan this page myself and just found it on the internet.) 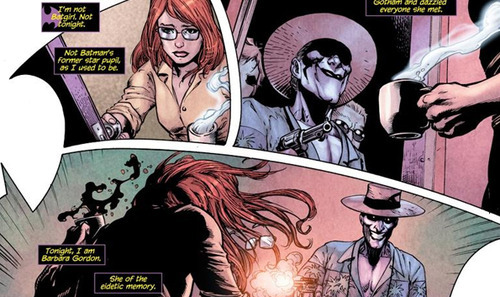 Because of this…I completely forgive DC for taking Oracle away. Because they kept Barbara a character who still has power and something to say to readers.

When I look at this issue, I’m reminded of my first library class.

I started back to school for my master’s degree to become a librarian in September of 2011. That’s also when all the New 52 books premiered.

True, I didn’t grab this baby until November, however, since the first printing was sold out. But it stands out to me, becuase I remember taking a break from homework to read it. I picked it up wondering if Barbara would still be a librarian or at least have her MLIS, the very degree I was working on, in this New 52 universe. The answer was no, but whatevs. It could happen (*cough* *cough* cameron-stewart *cough* cough*)

My class when I read this issue was Foundations of Library and Information Science and my instructor was Nancy Lansenmeyer, who also became my advisor. She is the sweetest lady on the entire planet, and I learned a lot. She even gave me a break when, on my way driving to class, my car slid in some mud and became stuck. She didn’t dock my grade for the missed work and she stayed way behind after class to use her AAA membership so I could be towed out of the mud.

Condition of My Copy: Autographed and personalized by Gail Simone (who is fabulous and oh-so-friendly) at this year’s C2E2. No matter the length of her line, she took a moment to speak with each fan and thank them for supporting her. It’s also autographed by cover artist Adam Hughes who was…not…as friendly. Also has slight, folding damage in upper right corner.

See Also: My Comic Memory of the other Batgirl #1.