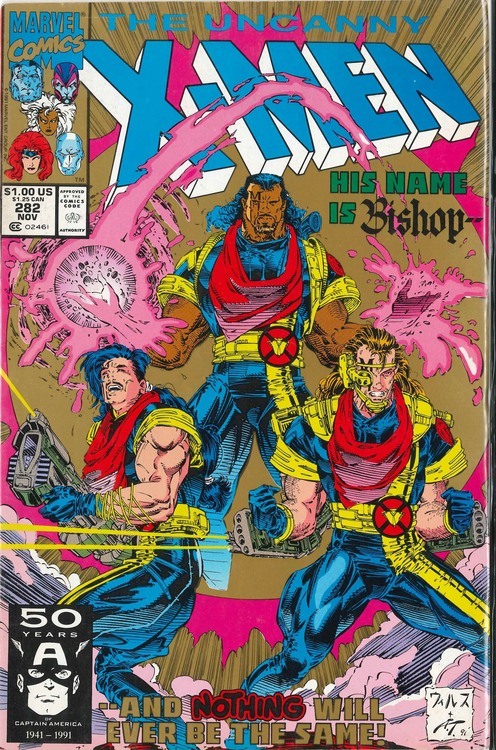 After a Sentinel attack, Jean is believed to be dead again. 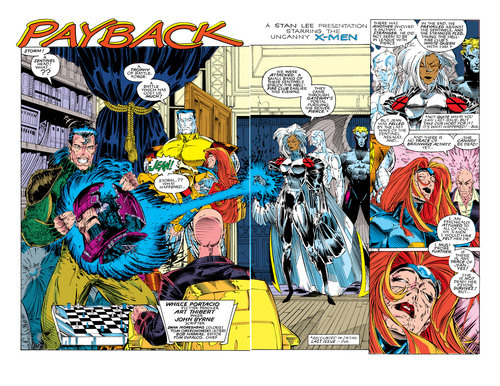 However, she managed to instead transfer her consciousness into the body of Emma Frost, thus beginning a cycle of sharing things with Emma for years to come, including the Phoenix Force and Cyclops’ penis.

The Hellions were killed by the Sentinels in the issue prior at a Hellfire Club party, and this will forever haunt Emma, eventually leading to her turn as a good(ish) guy. By issue’s end, Fitzroy, with his power to open time portals, is attacked by three mutant soldiers from the future, one of them being Bishop who would stick around for a couple of decades until the writers couldn’t decide what to do with him anymore. 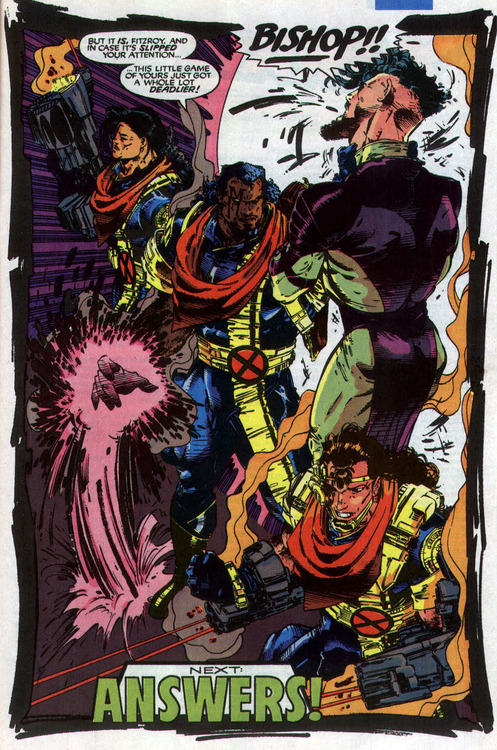 This was a significant issue in the ‘90s, so of course I’ll keep it, but let me just say that I hate Bishop. I really do. A gun-wielding X-Man? Why? Why!

Make no mistake; it’s nothing directly against the character himself, it’s just that I never thought he should be an X-Man. I have a general dislike of time/dimension-displaced mutants such as Bishop and Cable. But sometimes, they can be cool. I can be perfectly happy, even enjoy them immensely, when they are on other X-teams like X-Factor or Exiles. But to have a time/dimension-displaced, gun-wielding, trigger-happy X-Man from the future on a core X-Men team? No thank you. Stick him in his own series or an X-Men offshoot book, and you’ll hear no bitching from me, but don’t let them be a major player in my main X-Men book!

The premise of the X-Men is a simple one and there’s beauty in that simplicity; a group of mutants, learning to control their powers to protect a world that fears and hates them. Bring a group of mutants who are disenfranchised from a bleak future where mutants have already lost/won/controlled/are the dominant species and who prefer to rely on weapons rather than their mutant power and you start to lose my interest just a bit.

This issue reminds me of the first time I got naked with another boy. I won’t go into detail because I was about ten, and that’s totally gross, but my friend _____ and I shared this issue with each other one night during a sleepover; I had the second printing and he had the first. We didn’t know that was the difference exactly, we just knew the covers were different colors and thought it was cool.

Then we watched soft core stuff on Showtime and…well, we just got curious. No touching of any kind, but we just sort of explored. I already knew that I was different, but this was marking the beginning of my blossoming sexuality that would be bring me years of teenage angst, shame, and anguish for years to come.

Condition of My Copy: Gold.