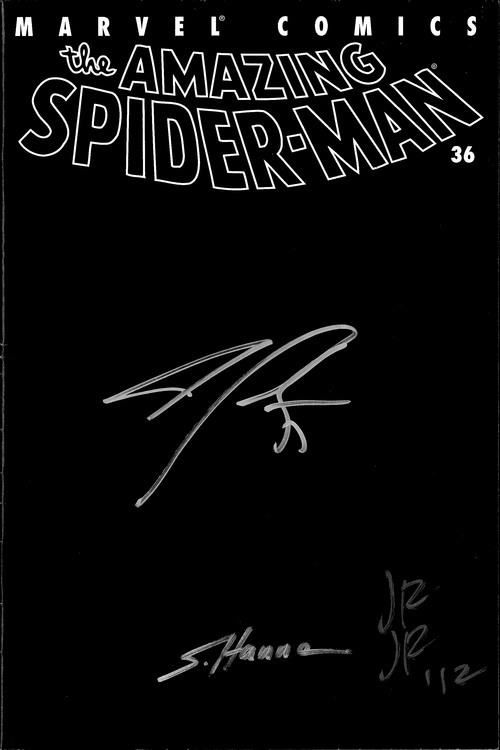 Spider-Man’s regularly scheduled storyline is interrupted by the events of September 11th, 2001. Spidey stands among the rubble, barely able to comprehend what he is witnessing. Spidey feels what we felt. 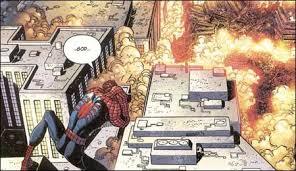 Below, police and firefighters try to free those trapped beneath the wreckage, while getting the rest of the population to safety.

Spidey and other Marvel heroes (and villains) lend their assistance, doing what they can, but it’s worth noting they never outshine the emergency responders. They are the true heroes of this story.

Written in a poetic style, the heroes are praised, the victims mourned, and the attackers are warned to look for the response to their message in “thunder”. This story has no happy ending. No sci fi Deus Ex Machina to save the day. No heroic, last-minute effort of Spider-Man calling on all of his strength and honor to defeat the villains. This story, surprisingly, despite the colorful heroes spattering the pages, is a realistic homage to how many of us felt that terrible day.

This issue was added to my pull list at my local comic shop, since I had returned as a Spidey reader thanks to Straczynski’s fresh writing on the title. This issue became an instant collectors’ item, which…I’m not sure how I feel about that. My understanding is that Marvel donated portions of the profits from this comic to 9/11 charities, which…yeah, they better have. But you have people out there selling the damn thing on eBay, even comic shops…I just don’t feel like it’s appropriate to make a profit from this issue.

But, I bought it and became part of the system, so I suppose I shouldn’t judge. It would have seemed flippant for Marvel to do nothing to address 9/11, after all. And after reading the issue, I have to admit it is very tasteful. It’s a masterpiece, even. So much so, that I chose to have it autographed. At first, I questioned having this one signed by its creators, thinking that it trivialized the content. But I realized that I appreciated the issue BECAUSE of its content and that I had no intention of selling it but would keep it forever.

There is one arguably ridiculous moment, which is this:

But it’s only ridiculous if you consider this issue taking place in continuity and accept these characters as contextually real. If you accept that, in this issue they are nothing but symbols and…you know…fictional, then it’s fine.

This issue is beautiful. Simply said. Art, words. It is beautiful and the creators should be proud.

My memory of September 11th, 2001 is nothing special. It’s nothing that most Americans didn’t experience that day. We all faced this tragedy together.

My first day of college. Driving to Otterbein for my first college class ever.

The radio in my old ’88 Grand Am. It is the Morning Zoo on WNCI. But they aren’t being funny. They are informing me that a terrible accident has occurred. That a plane has crashed into the World Trade Center. One of its buildings toppled.

I get to class. It is an Integrative Studies class. English literature. The professor is a ditzy nimrod. She tells us that what is happening in the outside world right now doesn’t matter now. All that matters is literature and this class until the clock runs out. That life goes on and tragedies happen all the time. She then proceeds to talk about nothing but herself for the next two hours. About how wonderful and enlightened her well-read life has been, being more talented than most writers she critiques and far more intelligent than her colleagues. I really don not like this woman.

After class, I go to the student commons for the first time for lunch. There is a television broadcasting the news live. The second tower has fallen while I was in class. More people are dead. I am seeing any footage of the day for the first time. Billowing smoke, monstrous fires. My chicken sandwich is dry, and I barely notice.

I call work. I am supposed to be at Old Navy that night for a closing shift. I tell them I am not coming in. They say that is not good, that I need to be there to help the customers. I explain that customers that are there should be ashamed of themselves. They should be with their families and loved ones. Sometimes, for at least one day, it is not okay to just “go on”. Sometimes the outside world does matter. Sometimes life does need to come to a full stop. At least for one day.

I need to be home with my grandmother. I know that she will be upset and scared by what she is seeing. She saw some of World War II. I know she will be worried of going back to that. But when I come home to see her, she is hard as a rock. She is showing very little emotion. So instead, I fall into her arms and cry.

See Also: My Comic Book Memories of The Amazing Spider-Man #30 for the beginning of Straczynski’s run and Origin #2 for another memory involving that terrible Otterbein professor.