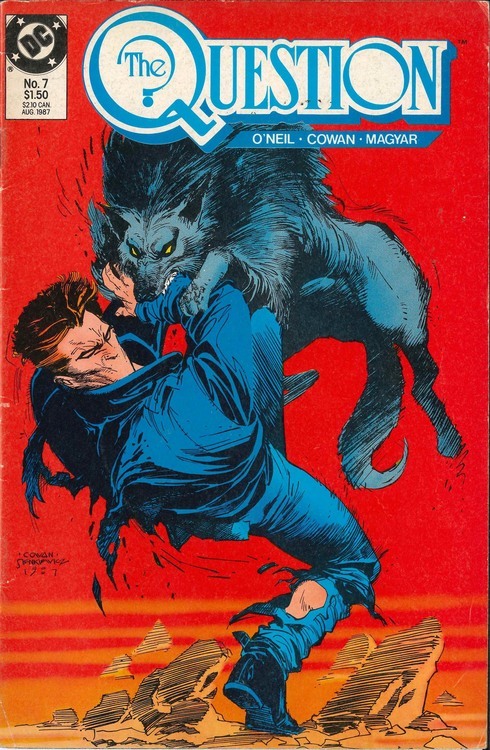 Volk, a leader in Hub City’s illegal gambling market, is an honorable savage who was raised by wolves. 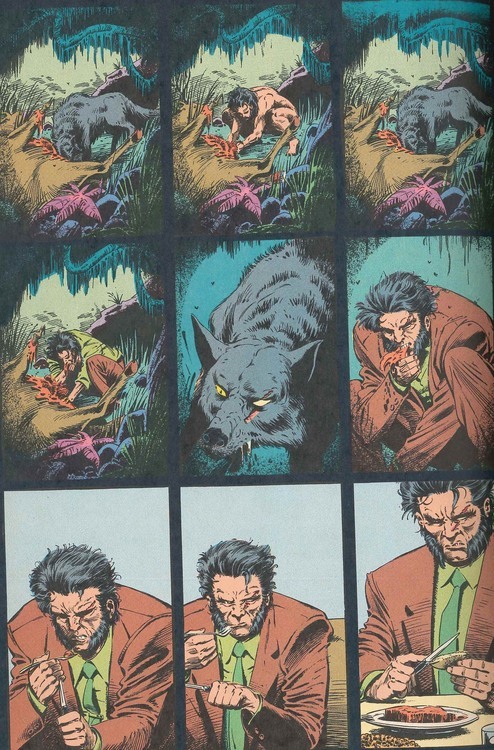 Tired of his life of crime and with a price on his head, he attempts to strike a deal with Hub City’s Mayor Fermin, offering to turn in his fellow criminals. Fermin offends Volk with his drunken, debased behavior, however, and the potential informant walks away. Fermin’s wife, Myra, attempts to appease to Volk, apologizing for her husband, hoping Volk will disclose the information to her. He refuses, and so Myra turns to her ally Vic Sage, the Question, asking him to interrogate off the books.

The Question becomes ensnared in an attempt on Volk’s life, helping to protect him and take down his wannabe assassins. 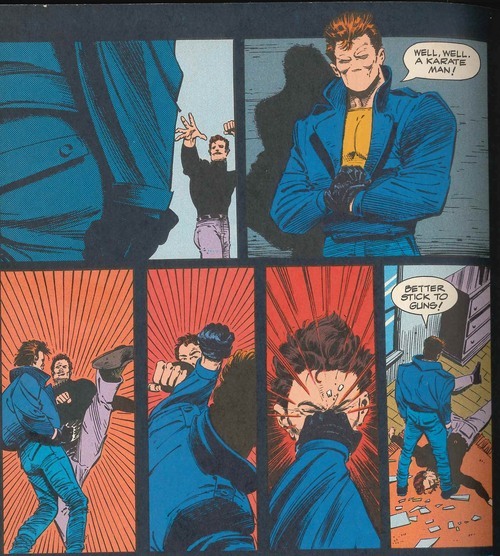 However, a gunshot wound to the gut from the last remaining hit man puts Volk in the grave. The Question later visits a spot that had been of importance to the former wildman’s life, encountering a wolf bearing a striking resemblance to Volk. And he can’t help but wonder…

Since I first encountered the Question character on Justice League Unlimited, I have been enamored with him. Until I saw this comic, I had not even realized that he had had his own ongoing series. This issue was a stand-alone story (as were most issues in the series), so it was easy to follow. I was hooked after this, and needed more Question in my life; the artwork, the maturity, the philosophy and ethical arguments being raised…this series is amazing. It’s typical-‘80s-comic dark, but it’s smart. Very, very smart.

I hope against hope that I can someday make it to a convention where Dennis O’Neil will be and have him autograph these issues.

I bought this issue at the Half-Price Books near my grandmother’s house in Reynoldsburg. It was in the $1 bin, so I bought it and a few others to keep it company. After that, I went to her house and she made me food and we watched some TV.

A commercial came on for a reality show which had people being placed in terrifying, “supernatural” situations, such as a haunted house. Their reactions were filmed and televised, and I’m sure there was a contest involved. One of the contestants was a black man who screamed a startled scream, high-pitched and sharp.

Gramma went on to explain that “you see, black people are more afraid of ghosts and monsters than normal people are, because they believe in all that voodoo and stuff. That’s why black people are so much easier to scare than the rest of us.”

Over the years, I have been very outspoken against my grandmother’s nearly-quaint racism, but sometimes all I can do is shake my head.

Condition of My Copy: Loose cover, lots of damage, but still damn smart.