Days of Future Past releases tomorrow night, and I CANNOT WAIT! 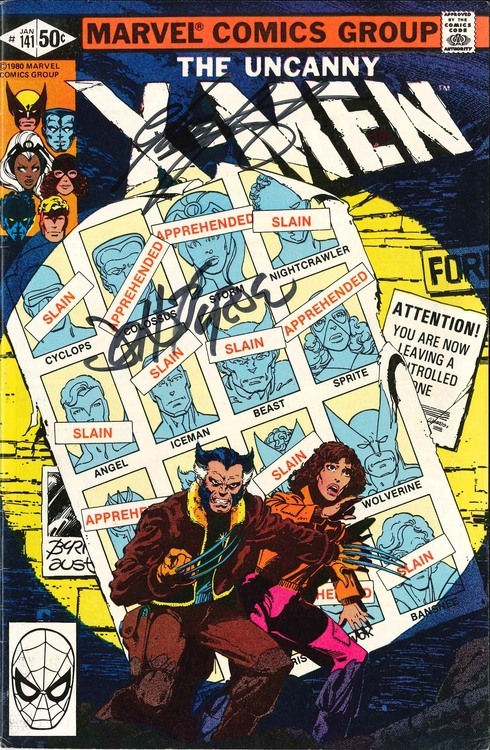 Well, do I really have to go into this? You know what’s inside. You know this cover. This, of course, is the beginning of “Days of Future Past.”

It’s a bleak future for human and mutantkind. The Sentinels, orginally designed to eliminate the mutant “threat” has turned on all living things, enslaving the planet. A small band of remaining X-Men come up with a plan to fix the problem; mentally send Kitty Pryde back in time to her old body, therefore changing the past and preventing this horrible future from ever happening.

I didn’t realize when I got this issue just how classic this storyline was. I hadn’t yet realized that this cover art was iconic, and I could never have known that it would become a major motion picture in my adulthood.

I had this issue autographed at two separate Mid-Ohio Comic Cons in my 20s, one with John Byrne and one with Chris Claremont. I now recognize its significance, and the trend that this comic set. Every time I see an alternate scary timeline in any franchise, I know that Chris Claremont and John Byrne did it first. Oft replicated but never outdone.

I was playing with my friend Cory in a playground by the trailer park where we lived when the trailer park showed up. He started calling us names, making assumptions about our sexuality, called us sissies, etc. We tried to do what adults always told us to do and ignored him.

Enraged at being ignored, he began throwing rocks at us from across the playground. When we realized we were being barraged, we tried to flee. But I felt a sudden pain on my head, a shock that sent my neck wobbling like a slinky. I put my hand to the pain and glanced at my friend. Cory was holding his own head, cringing, tears forming at the corners of his eyes.

I felt something in my hands. At first, it felt like something crawling along my palms, squirming. It was hot and wet. When I brought my hands down from my scalp, I saw only red. The red dripped from my fingers, and then I felt it running through my hair (I had a lot of it at this time, and even had a trailer trash “rat tail”) and down my forehead.

I screamed, “Oh GOD!” at the sight in my shrill, child’s voice.

I began walking back to my home, arms and hands outstretched like a zombie, as the blood flowed from a top my head. My mother and some neighbors finally heard my wails and moans and came bolting out from their front doors with screams of “Call 911!”

At the hospital, they gave me five stitches. My friend, fortunately, required none. I learned that wounds to the head, even very small ones, will bleed an exaggerated amount. I was put on couch rest for a couple of days with some time off school. It was a grand time to be lazy. The bully’s mother even forced him to come and apologize in person. I remember he was bawling like a baby, his face red, snot dribbling from his nostrils.

My grandmother had taken me shopping for comic books the weekend prior, and I had not yet read this issue. I had seen the cartoon version of “Days of Future Past” already, so I was noting the differences as I recuperated on the couch.

Condition of My Copy: The condition of this copy is excellent, save for a minor smudge near the Spidey logo and on a few of the inside pages. I would love to know what kind of a CGC grade this could get with Claremont’s and Byrne’s signatures on it, but I would hate to doom it to a CGC coffin.