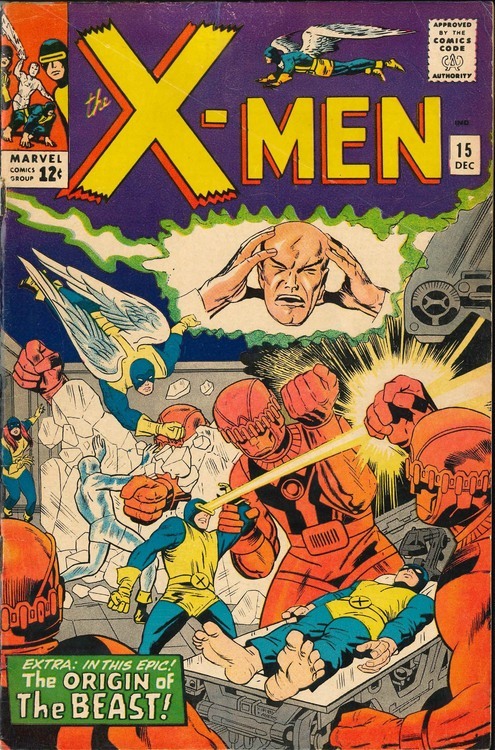 The Sentinels have gone rogue, kidnapping their creator Bolivar Trask as to force him to aid in the destruction of all humankind. The X-Men track the Sentinels back to their lair, and Professor X uses his telepathic abilities to manipulate the Sentinels somehow, giving his students a fighting chance.

As the Sentinels examine Beast, we learn that, before attending Xavier’s School, Hank McCoy was a jock as well as a scholar. He had used his mutation to aid him in his athletic pursutes, something which now brings him guilt.

OMG it’s the first appearance of the Sentinels! Okay, it’s not, it’s their second appearance, but it IS the first appearance of Master Mold! I don’t care too darn much for early X-Men, since the original Five sort of bore me compared to what was to come in the ‘70s, but I do love me some Sentinels. The Sentinels are the cockroaches of the X-Men world; no matter how many you kill, they continue to infest, and if you see one, youk know there are about a thousand you aren’t seeing. The Sentinel threat has always lingered and continues to pop up in the past nigh-50 years of X-Men comics, beginning with this issue. Okay, the issue before, whatever.

I was reading this comic on a sunny day outside of our trailer when I lived in a trailer park with my mother and her then boyfriend. He had just mowed what little lawn we had, and I just finished doing my job which was raking the cut grass and sweeping it off where it blown upon the little porch.

However, I didn’t do it “100%” so I had to rake again. I wasn’t sure what he meant, since I couldn’t see any more cut grass leftovers anywhere. It looked perfectly clean to me. But I did it again.

He then said that wasn’t good enough either, and wanted me to start picking up tiny little cut blades of grass by hand. I told him I didn’t understand because I had raked all the loose grass that I could. He then reported to my mother that I was “talking back” and so I was grounded for a week…for not understanding how to pick up loose grass that wasn’t there. I remember wishing that I had had mutant powers then to teach him not to push me around. Unfortunately, I was just a skinny, wimpy kid and the man hated me.

That was one of the earlier events I knew that this man, who would become my mother’s future husband, was going to be trouble.

Condition of My Copy: Pretty rough for being as old as it is, but not bad. No grass stains on it at least!