So, Channing Tatum has been cast as Gambit in future X-Men films? Sounds like it’s in the cards! Channing can be an ace in my hole any day! 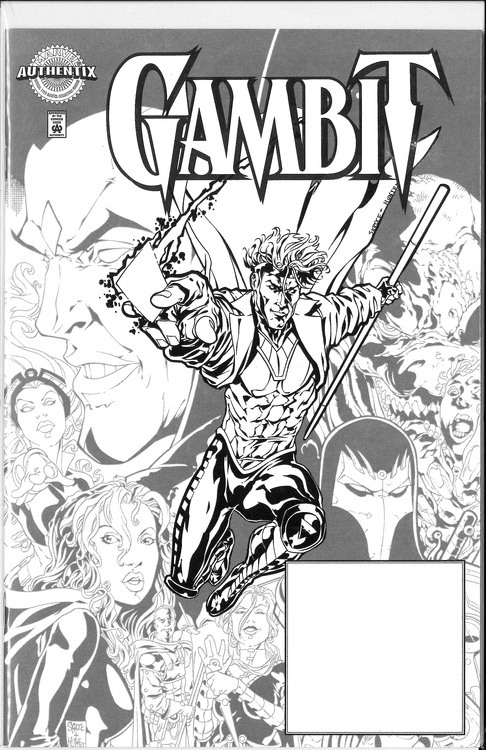 You know, I’m not gonna lie…I don’t really remember a whole lot about this issue. And, see, its bag and board are sealed with a holographic Marvel sticker, and it’s a bitch to get off, plus it loses some of its sticky everytime, so…I’m not opening it to find out this time.

I remember that Gambit returns to New Orleans for some reason and that writer was really trying to establish a sort of James Bonde-esque, Live and Let Die, feel for the book, giving Gambit his own motivations and rogues gallery, beginning with the X-Cutioner.

Because I love Gambit. I don’t know why. Please don’t ask me why. I recognize that he was a gimmicky character, and a bit of a Wolverine knock-off with the whole “mysterious bad boy” thing. But he’s awesome! I think the whole kinetic energy power set is clever, I like the style of the character, the playing card motif…I just like Gambit, okay?

This is a special order Marvel Authentix edition. Basically a sketch cover variant before sketch cover variants were a thing. But I didn’t have to special order for this or pay an arm and a leg, because I found it at a comic shop for a steal. I think it was only $5. It’s on Ebay now ranging anywhere from $20-$200. God, I wish I had that Daredevil authentix, though. That…that would be the best.

I did some musical theater in high school. And I hated every fucking minute of it. Musicals suck. I hate them. The only musicals I like are Evil Dead: The Musical, Avenue Q, Little Shop of Horrors…any musical that is filled with violence and profanity is fine by me, but the rest suck, especially Rogers and Hammerstein. Do you know what it’s like to be a gay guy who hates musicals? It’s fucking isolating is what it is.

In my sophomore year, the theater director had assured me that we would not be doing another Rogers and Hammerstein’s musical like we had the year before. I told her that was a good thing, because musicals only appealed to a very specific segment of the student population, primarily the ones with singing ability and who had vaginas or were castrated. So, keeping to her word, she announced that the musical for our sophomore year would be George Bernard Shaw’s My Fair Lady. George Bernard Shaw is maybe a step up from Rogers and Hammerstein, but not by much. It’s the still the same damn type of play. Plus, My Fair Lady was a misogynistic piece of crap that ruined Pygmalion. Ruined, I say!

This meant that, once again, the SAME fucking students were cast in the lead roles because they could sing, while the rest of got the shaft. I was cast in a bit part as some professor dude with a German accent. I read this comic during the first performance while I waited indifferently to go on stage.

I sequestered myself to stage crew after that year, since we did nothing but fluffy, faggy musicals every year after. Of course, as soon as I graduated, they decided to a regular, dark and moody stage play.

Condition of My Copy: It’s aces.

See Also: My Comic Book Memory of another Gambit #1.