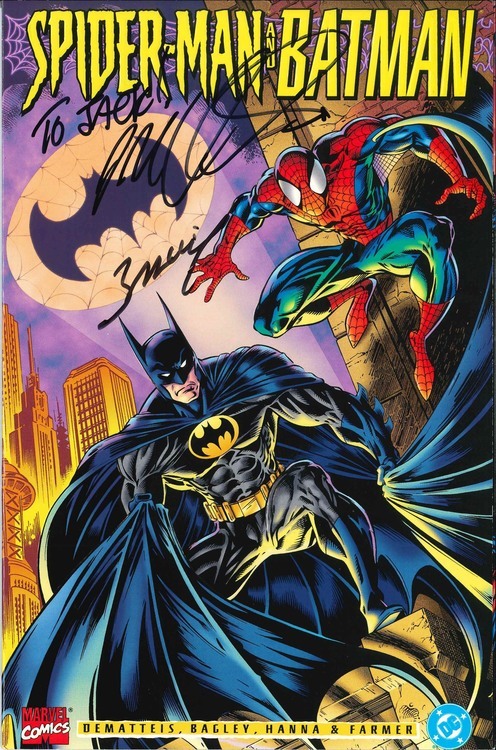 At last! Spidey and Bats meet and take on the combined villainy of the Joker and Carnage! After both being transported to Arkham Asylum, Joker and Carnage are candidates for an experimental rehabilitative experiment. Carnage breaks from custody and brings his Clown Prince idol with him. Spidey shows up in Gotham to rein in the chaos, much to Batman’s displeasure. Bats is finally able to overcome his grumpy-face and play nice.

This is one of my single most favoritest, bestest issues. This is the crossover fans deserved years before, but perhaps it’s a good thing that they waited.

This story, though short since it was just a one-shot, brings us some memorable moments and really plays off the unlikely chemistry between the characters; Bats getting irritated with Spidey’s jokes, Carnage getting irritated with the Joker’s theatricalitities. The story also does a neat compare/contrast of the two heroes’ origin stories.

Despite how many times I’ve read this book (practically have the damn thing memorized) I have kept it prestine. I simply love it. And it turns out that Spidey penciller Mark Bagley is the one of the best Batman artists on the planet, despite this being the only time, as far as I know, he has ever illustrated the character.

This comic helped me through some lonely times. I obtained it when I had to move to a new school district. I was living with my mother at the time and her chaveunistic, self-centered husband. We moved to a house near the Granville, OH area, and I was set to attend a new middle school. Making new friends is hard enough, but making new friends in middle school is like trying to pull your nutsack over your head.

Trying desperately to cling to past friendships, I invited one of the few friends I had from my previous life for a sleepover in the new house, and his parents drove him nearly an hour to come and see me. But it was horribly awkward. My mother’s husband was (surprise!) very rude to him, distant, dismissive, and talking down to my mother, my mother was a stressed-out wreck from the move, and I left the poor kid completely bored the entire time because I didn’t have anything set up for us to do. He was more of the sporty type, but I…didn’t really do sports games.

He left the next morning, and that was the last time I have ever seen or heard from him. I was soon to discover how lonely middle school would be. Womp womp. But at least I had this comic! This comic would never leave me or ignore me. If I felt about candy like I felt about comics as a kid, I would have gotten fat much sooner.

Condition of My Copy: Prestine, and recently autographed by Mark Bagley!