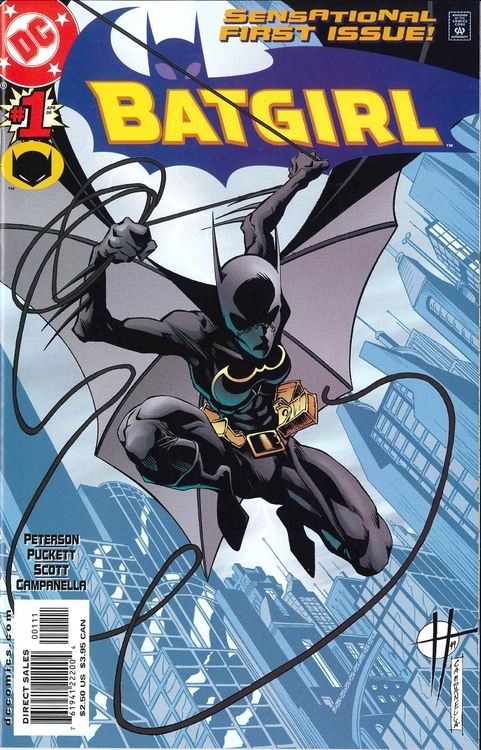 Officially accepted as a new charge for Batman, the new Batgirl is given the greenlight to start superheroing on the streets of Gotham with on rule; do not take on any opponent with super powers. Let’s see how long that lasts by issue #2.

I love this character so much. I thought that Cassandra Cain was a brilliant addition to the Batman family. Rarely had I encountered a character so unique who brought such diversity to comics. She was Asian, mute, traumatized…what a wonderful addition to Batman’s world! I really appreciated DC putting her into the Batgirl role.

Sadly, this Batgirl got bounced around and treated poorly by other writers, removed from the Batgirl identity, turned into a villain, etc. As of now, she has not even make it through DC’s reboot, with Barbara Gordon becoming Batgirl again. I am sadness.

This issue brings me back to Junior Prom. Oh, high school was just…it wasn’t fun for a messed-up weirdo like me. But prom was kind of fun. Kind of. Actually, going to Cedar Point the following day for After Prom was the fun part because roller coasters!

You know who prom was definitely not fun for? My date. My poor date. See, I was a big ol’ homo at this time too, because that’s how it works. But I was so ashamed that I was in a deep, deep, buried denial that I was a big ol’ homo, because that’s also how it works. I had no genuine interest in any girls in my class, so deciding who to ask (and facing possible rejection) was not easy for me. I had resolved that I would not be attending prom that year, when someone presented the notion that a girl on our cross country team thought I was “funny”.

So I thought, Why not? I asked her. She said yes.  And she had to have been miserable.

I was inattentive to her. I tried not to be, I tried to pay attention, but it was difficult. It was difficult because there were hot guys around. Guys I thought at the time I just wanted to be friends with. No, yeah, I was into them. In retrospect, I spent all my time flirting with the guys, trying to get their attention, and even dancing with them, and I had not even realized it (P.S.- I some luck from doing so!)

I barely danced with my date, I forgot to hold the door open for her, I had to be reminded to get her drinks and to return to her side…I did not hang out with her at After Prom or during the Cedar Point trip. Man, I really hope she found a cute guy to get lucky with that night. Because I did.

Condition of My Copy: Lucky!