I interrupt your reguarly scheduled and dull Comic Book Memory to bring you how much I loved the X-Men: Days of Future Past movie, because holy shit! 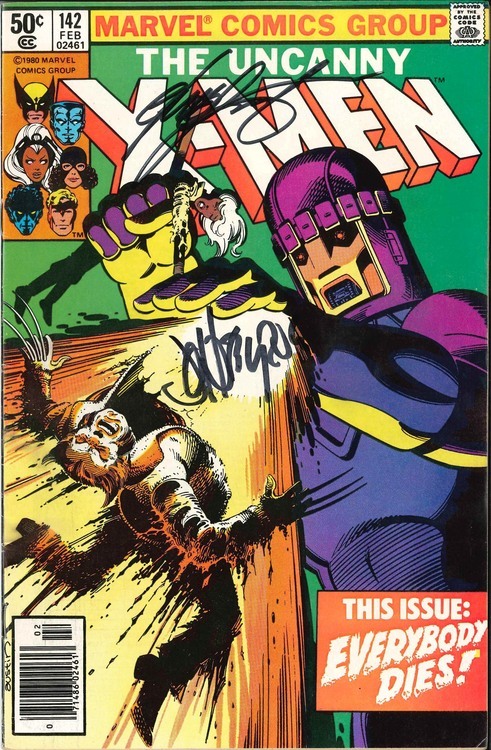 Artist: You know that too!

Okay, this is sort of cheating, because this memory is just from last night, but from now on, whenever I see this issue or 141, I will remember how much I loved this movie. Yes, I saw X-Men: Days of Future Past at 10:00pm last night, so who wants to touch me? I said, WHO WANTS TO FUCKING TOUCH ME! Cartman invoked.

I want to lick the balls of every single person responsible for bringing this movie to my eyes and ears.

Bryan Singer? I will lick his balls.

Hugh Jackman? I will lick his balls.

Patrick Stewart? I will lick his balls.

John Ottmon? I will lick his balls.

Patrick Stewart? I will motorboat those balls.

Ellen Page? I will lick her balls.

(I know you weren’t in this movie, Rebecca Romijn, but I would gladly lick your balls too for helping us get here.)

I know that everyone is comparing this movie to The Avengers, and that Bryan Singer says not to do that, but…I can’t help it. Because these movies have something very important in common, and it ain’t Marvel characters or super powers:

Both of these movies pulled off the fucking impossible. It’s not possible to take characters from five seperate films and throw them all together in one movie, just like it’s not possible for the sixth sequel in a franchise to be worth watching. Especially if that movie has time travel. It was not possible for either The Avengers or X-Men: Days of Future Past to be not ridiculously crowded, convoluted, messy piles of shit.

Yet, just like the bumblebee said “fuck you” to aerodynamics, and flies when it shouldn’t (that’s still a thing, right?) Avengers and DOFP are balls-to-the-wall epic. Phenomenal.

Cohesive and powerful story that is equal parts entertaining and thought-provoking? Check.

Some nerds behind me in the theatre were whining; it didn’t stick to the original story, it was stupid to have Wolverine go back instead of Kitty, Kitty’s powers don’t work like that, etc. Well, fuck you, nerds! The movie was awesome! It gave you all the winks and nods to the original that you could possibly handle, if you would just open your eyes a bit. I mean, come on! Shut up and enjoy it. This was a fan-pleasing movie if ever there were one, especially since it apologetically CORRECTED all the mistakes of The Last Stand, the worst of the bunch. It was as though Bryan Singer was apologizing to the fans for abandoning the franchise, leaving us with Brett Ratner.

Against all odds, this movie has pulled the franchise out of the depths. It had some helpe along the way, with First Class and The Wolverine, but this movie really just nailed it. It accomplished this WHILE amidst a Bryan Singer sex scandal, I might add. Bryan Singer can rape all the boys he wants if he keeps delivering us X-Men movies like this. I will line some boys up for him myself if it means he will stay on the franchise. (OMG calm down, I’m kidding. Sort of. No, totally. Mostly.)

Anyway, last night was a wonderful experience. I’m glad I went out on a school night to see it. And I now find myself eager with anticipation for the next Apocolyptic entry, starring Hugh Jackman’s ass.

Condition of My Copy: Autographed by Claremont and Byrne. I would lick their balls too.