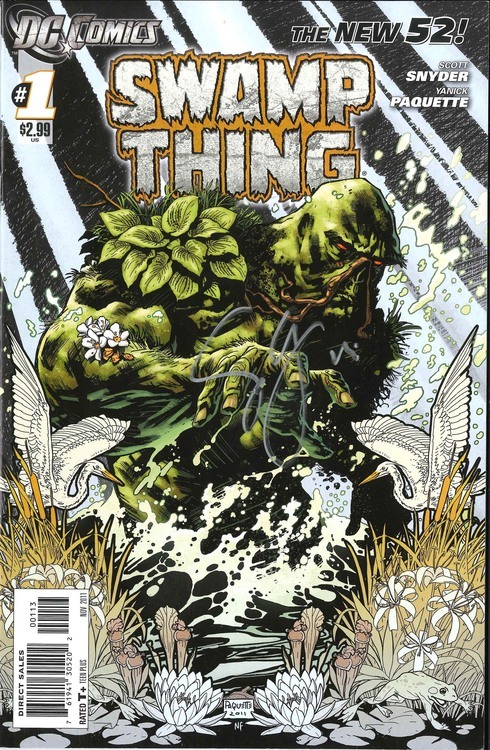 Alec Holland, who was once Swamp Thing, is weaved back into the mainstream DC Universe. All of nature is out of whack as a sinister force called the Rot prepares to cause an imbalance. It is an imbalance that only the Swamp Thing may be able to right, but Dr. Holland has no interest in sacrificing his humanity and normal life yet again…only he may not have a choice.

Firstly; this issue is absolutely beautiful. Paquette’s artwork is to die for, the way his panels weave out of moss and faces and water and across splash pages…I just love it. I mean look at that cover! LOOK AT IT! Those are fucking pitcher plants on that cover!

Secondly; I grew up with a love for Swamp Thing, watching the movies, the corny show on USA, the short-lived cartoon…I even had some of the toys! But I had never, until this issue, read a single Swamp Thing comic. My explanation would make most comic fans cringe, since I just wasn’t that interested in reading his older stuff, as critically acclaimed as it was, because it wasn’t part of the main DCU. I know, that’s a stupid reason. I just wasn’t that interested in Vertigo comics and, it also just felt sort of daunting to try to get into it. It sounded awfully complicated. So, I was thrilled when DC relaunched the title in its New 52 line and made it an easy jumping-on point.

I read this issue while I waited anxiously for 6:00pm to strike on a December night. It was the night of my first date in months, maybe even years. We had met online, exchanged pictures and such, and he seemed very cute and interesting.

When 6:00pm came, I left to pick him up at his house. Upon arrival, a handsome, youthful, enthusiastic face answered the door with…bad teeth. “Bad” doesn’t quite cut it, actually…we’re talking severe hygiene problem. They were covered in some kind of brownish-orangish substance which appeared organic in nature, his gums inflammed. But I wasn’t going to let that stop me from getting to know him.

We went to a delicious Tai restaurant and engaged in stimulating conversation. We had lots of interesting things to talk about, shared some laughs, and learned we had a lot in common.

We then journeyed to the Columbus Zoo for the winter Wildlights, walking and talking amongst the brightly lit spectacles, exchanging stories of our lives and our favorite cartoons. And in mid conversation, and unbeknownst to him, his gums began to bleed. When I took him home, he wanted a kiss. I was reluctant, and I know that my reluctance showed despite how I tried to hide it, but I kissed him anyway. He asked when we would see each other again. I told him I would call.

I spent days wrestling with my own consience. I could not deny that I had had a wonderful time with him. He was funny and smart and charming, and we had a lot in common. But I also could not deny the bad teeth were a bit of a turn off. I hated myself while I tried to decide whether or not to call him back. If I did call him back, what would I say?

If I chose to not see him again because of his teeth, or made the condition of his teeth a deal-breaker which a second date was reliant upon, then I was a hypocrite. I have always been a harsh critic of the superficial standards and unhealthy attitudes the gay community places on appearance, and here I would become a participant. I would be refusing a second date based on a single, physical, perceived imperfection. After all, how many times had I been refused or ridiculed by gay men for being overweight or being too feminine or too nerdy or any other reasons they have used over the years. How could I do that to someone else?

If I chose to see him again, then perhaps I wasn’t being fair to him or myself. After all, if I was having that much mental turmoil after just one date, then perhaps we were doomed from the start. And if I did see him again, did I owe it to him to tell him that his teeth were bad? To pressure him, for his own good, to get them fixed? Perhaps it was something he needed to hear from someone else, since it’s an issue that can have serious consequences in many of life’s aspects.

As I took so much time arguing with myself whether or not to contact him, he took the initiative and contacted me. He had not heard from me, and he asked if something had gone wrong with the date. Now I was trapped, but at least it forced a decision. I could either lie and give him the usual line, “Oh, it’s not you, it’s me” sort of thing, or I could be honest, risking offending or even humiliating him while making myself look like a superficial asshole.

I decided to be honest. I told him everything was great, but I couldn’t get over his teeth, no matter how much I wanted to. I told him that for his own health, he really needed to get them checked. He said he understood and that it was something he was intending to deal with.

And fortunately, he did not call me an asshole. He didn’t hate himself or me, as far as I can tell. To this day, we are still friendly with one another, and I can tell from social media that his teeth are not only fixed, but that he has an active social and dating life.

It seems that, just maybe, honesty was the best policy.

Condition of My Copy: Autographed by writer Scott Snyder, the NICEST guy in comics.