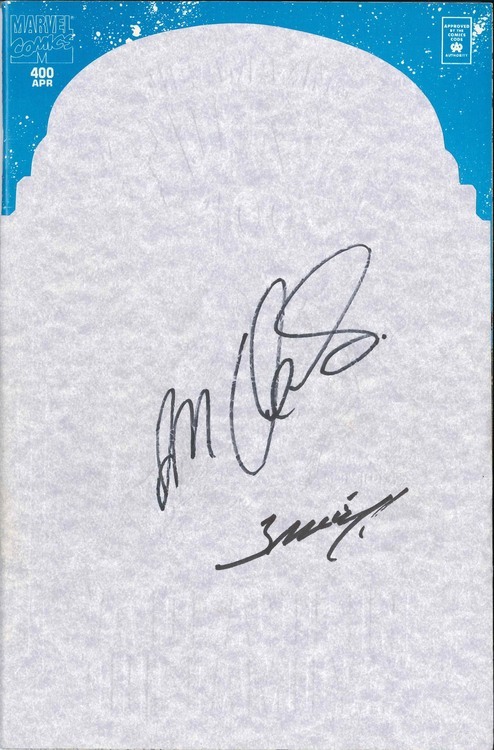 Heartache. That’s what’s inside. Yes, before Clark and Lois got married, Aunt May died. 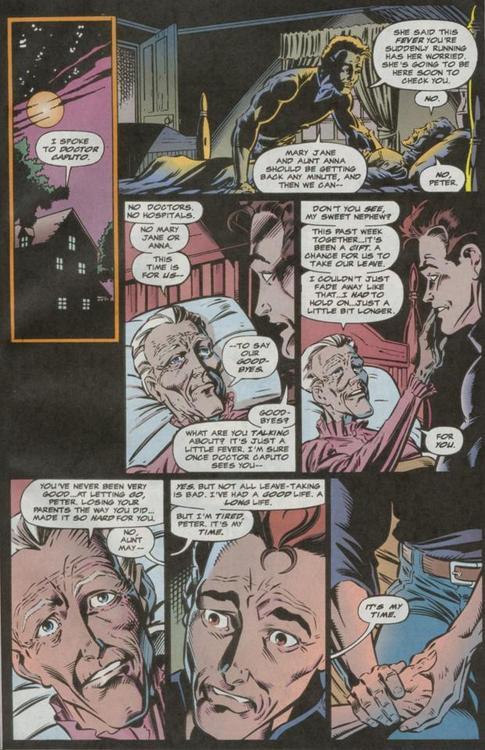 In this comic, Aunt May, in a most touching scene, confesses to Peter that she has known for some time that he is Spider-Man and that she is very proud of him. An angst-ridden Ben Reilly begins to accept his place as a clone, and Aunt May have a heart-to-heart. But then Aunt turns dead while Peter quotes J.M. Barrie and all are reduced to tears, while poor Ben Reilly is forced to stay on the roof and cry all by himself, unable to even say goodbye to May. 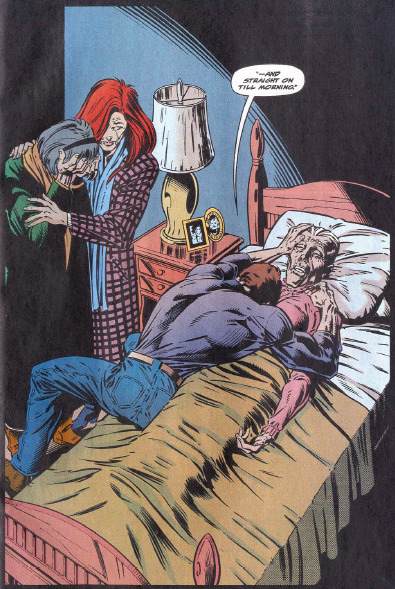 Before May’s body has even had a chance to grow cold, Peter is arrested for some reason, ending the issue on a cliffhanger, but the important thing is that this is the issue when Aunt May dies the first time.

Okay, so she dies and then gets better, and it’s not like she really dies a second time, but she does come damn near close to it on multiple occasions. In fact it was another potential “death of Aunt May” which led us into “Brand New Day.” Never mind.

This is issue is from the heart of the 90s and the dreaded Clone Saga, so it’s already got two very significant knocks against it. But this issue is not bad, in my opinion. The whole Peter being carted away by the police is pretty abrupt and feels uneven, but overall it’s a good read, which makes it the best of the worst I guess(?)

The writer J.M. DeMatteis told me that he hates the cover, and I have to agree with him. It should be a neat effect, with the tombstone and all that, but it is actually just really hard to see and bland looking. You basically have to feel over the thing like it were Braille. Here, here’s a better look… 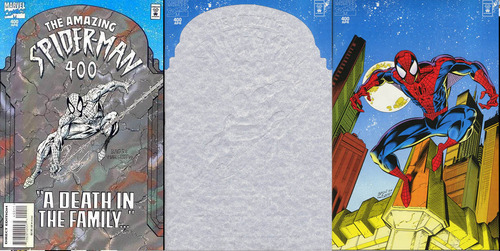 I don’t know if Aunt May’s death has ever been referenced since she got better. When she’s fatally wounded or kidnapped in the series after this, I don’t recall Peter ever reflecting, “Oh no, not again”, so despite not being a bad read, this issue is pretty much ignored.

Aunt May reminds me of my grandmother. I mean, I’m sure she reminds a lot of readers of their grandmothers, but I’m special. I read this issue and cried because I imagined having to say goodbye to my gramma someday.

I had to face that worry head-on once, and this comic will always remind of that frightening day.

I was living with my grandmother at the time. It was in early afternoon and I was distracted with a video game. From my bedroom, I heard my grandmother call for help from her bathroom. I bolted to the sound of her cries and there she was, a sight I will never forget. She had been sitting on the toilet and was now tipped over. Not fallen flat, just tipped, unable to move an entire side of her body.

The right side of her face was drooped and lame, as she looked up at me with desperate eyes and said, “Call Jerry.”

I fled the room and straight to the phone. Jerry was her oldest daughter. I did not call Jerry. I called 911. I came back into the bathroom and put my arms around her, trying to prop her upright, but also afraid to move her. I held her in my arms, stroking her hair and her back, assuring her that everything would be fine.

I said, “It’s already done. They’re on their way.”

Due to the symptoms, I was sure what I was witnessing; my grandmother was having a stroke.

What a relief to learn later at the hospital that everything would be okay. Gramma had experienced what’s a called a TIA (sort of a stroke-lite that isn’t usually as serious) and was expected to make a full recovery. Though, during examinations for this event, the doctors would learn of a blood clot which they decided to preemptively correct with surgery before it could cause any problems. I was still so grateful that my grandmother was okay, and even grateful that because of this relatively harmless (yet frightening) ailment, another more serious condition was avoided.

I realized that day, though, that my grandmother would not be around forever, and I now travel to visit with her at least once a week. And let her cook for me. I do it for her benefit, not for mine, I swear, she likes it.

Condition of My Copy: Autographed by J.M. DeMatteis and Mark Bagley.