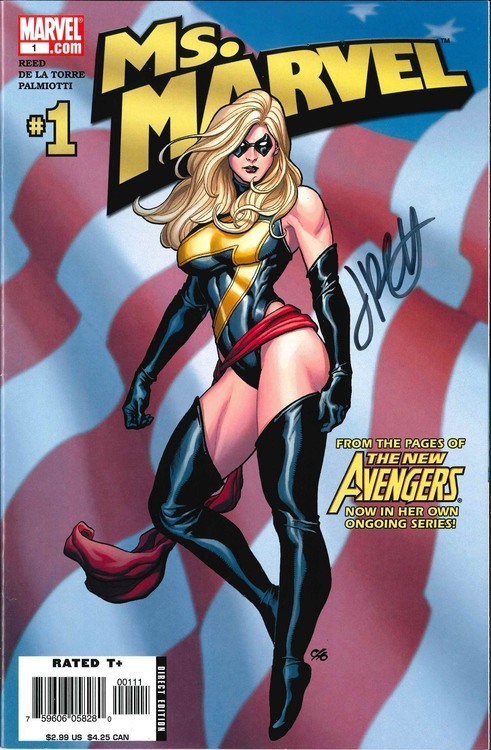 Carol Danvers’ quest to define herself begins, mirroring the quest for identity the female community has endured for centuries. Carol returns to her original Ms. Marvel moniker from being called “Warbird”, and hires a publicity agent to help establish her image within the Marvel Universe.

This book features lots of great little moments, allowing it to take off with a strong start, including her punishment of the lame-ass Stilt Man and her quip-tastic dialogue with close friend Spider-Woman.

The Carol Danvers character resonates with me in many ways. Like, for example from this issue in particular, her desire to define herself and her attempts to step into the spotlight after having such a convoluted past. Carol wants the world to know who she is, what she represents, and why she wants to be a superhero. She wants to be an A-lister and to be recognized as such. I think a lot of us can relate to that.

I bought this comic book while enrolled in a women’s studies class in college! I eventually became the poster boy for the women’s studies department, and I am of course aware of how ridiculous that sounds.

I have always had a fascination with gender roles and gender inequalities in society. Maybe it’s because I was surrounded by independent women growing up, but who knows? So, I naturally carried this interest into my academic studies. Whenever there was a “women in ___” or any class dealing with gender or sexuality, I snatched it up and got my learnin’ on, usually earning an “A”.

After doing this quite a few times over a few years, my adviser approached me and said, “Do you realize you almost have a minor in Women’s Studies?”

Turns out, I had followed the curriculum to earn the minor with no intention to do so. All that was lacking was an official declaration to pursue the minor and a single class called Introduction to Women’s Studies. I took the class and was the only male. I loved it. It was one of the best classes I ever experienced. The instructor seemed to adore me, and so did my classmates. I adored them just as much. I was often invited to represent the department for special events and programs. Ah, good times.

One of the best papers I ever wrote for this class was about Ms. Marvel. I cited this essay called “The Rape of Ms. Marvel” and researched the character’s convoluted history pretty friggin’ thoroughly. I have since fallen in love Carol, and I love what Marvel is doing with her now.

Condition of My Copy: Autographed by inker and superstar Jimmy Palmiotti!

See Also: My memories of Witchblade #1 and Captain Marvel #1.