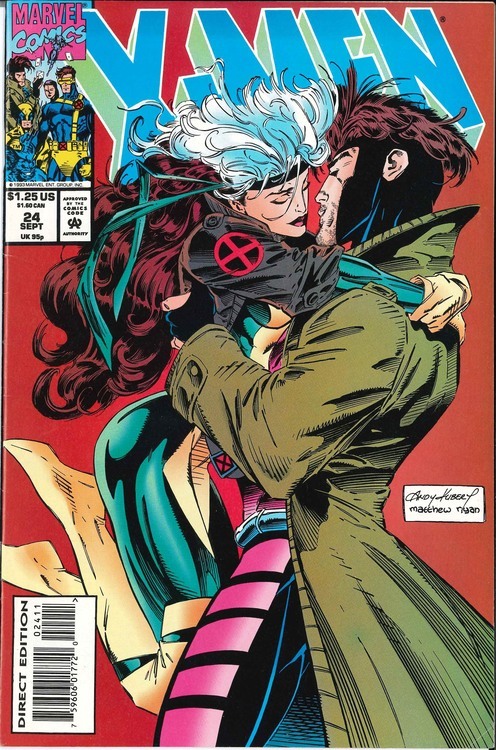 It’s date night for everybody’s favorite star crossed X-Lovers, Rogue and Gambit! In this issue, Rogue comes thiiiiiiis close to revealing her real name until Gambit hushes her by putting his fingers to her lips and saying, “Names don’ mean nothin’”, being all suave and stuff. ARGH!

I had to wait years to learn Rogue’s real name, YEARS! And what’s really messed up is that the movies beat the comics to it, giving Rogue the name Marie D’ancanto, so then the comics had to follow suit and gave her the name Anne Marie but didn’t want to admit that the movies named the character first so they introduced another character named Marie D’ancanto who would hang out with Rogue and…damnit, Fabian Nicieza, you should have let her just say her damn name in this issue!

Anyway, I kept this issue because it was one of the first issues I received from my first monthly subscription to X-Men. And because it reminds me of the frustration I felt when Rogue’s name wasn’t revealed. And because Mortal Kombat.

On the back of this issue was this advertisement which brings a whole host of memories flooding back: 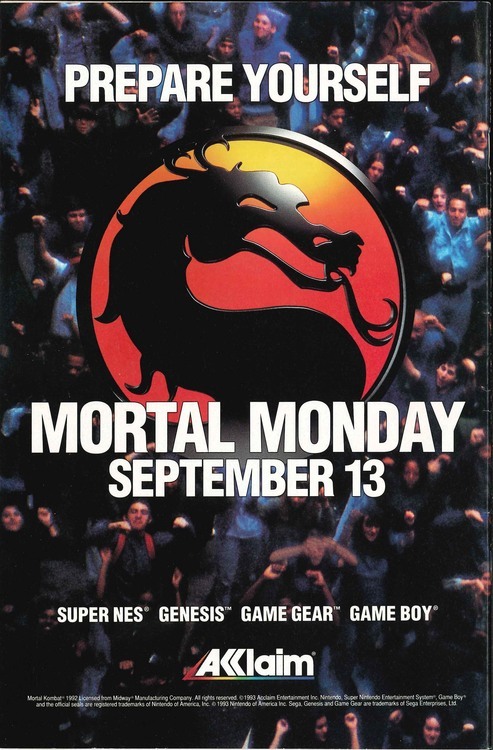 Back in ‘93, all the cool kids were brimming for this game, but I didn’t have a Super Nintendo or a Sega Genesis at the time. Sadness was mine. But my friend Cory did, because Cory was one of the cool kids!

I remember all the controversy over this game, from teachers discussing it at school to my grandmother watching news segments which told her that the explicit violence would let Satan into my malleable, little mind, and I would start roundhousing little girls in the face on the playground.

The first time Cory invited me over to play MK (also, why exactly did they feel the need to misspell “Combat”?) he told me about all the codes, from special movies to Fatalities and even a hidden code called “Nudality” which would make SONYA BLADE FIGHT NAKED hehehehehe. Boobies!

Cory gave me a detailed account of seeing this special code in play at his cousin’s friend’s house, so it was an absolute truth. We stayed up all night wired on Mountain Dew, playing until 5:00am, attempting all sorts of convoluted, yet precise, rumored methods of making the Nudality Code work. This actually resulted in me becoming burned out from the game, and I haven’t played a Mortal Kombat game since. I now know years later that the Nudality Code was just a rumor and was not possible in the first MK, which means Cory’s account of seeing it first hand was completely fabricated. Fucker.

I guess now Nudality and the other rumored code, Bestiality (or is it Animality?), have since been added to the games, but since it’s no longer 1993, I don’t really give a shit. Wouldn’t mind playing me some Mortal Kombat vs. DC Universe though…great, now I need to make friends with a cool kid with an XBox 360.

Condition of My Copy: It would be in better condition if it had Rogue’s goddamn name in it!