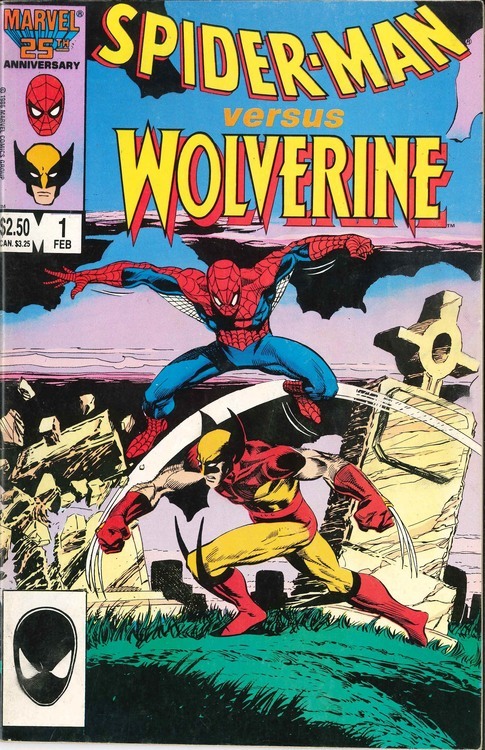 Marvel’s two most popular cash cows wind up in Germany through separate avenues and cross paths. Each is following the same spy chick; Wolverine because she’s a friend from his dark past, and Spider-Man because the Bugle wants her story. After an obligatory fight between the two due to a misunderstanding, Spidey accidentally punches the spy chick’s skull in, and the two heroes part ways. Not sure how either of them ever really got over this event.

Holy shit is this dark. I mean, really dark, especially for a Spider-Man story. This is recognized as one of Spidey’s and Wolverine’s greatest battles (at least according to the Fleer Ultra cards I had as a kid. You had some too, don’t even pretend.) Spidey was in his black costume at the time, though he switched to his old one in the story, which inevitably led to grittier stories in his book, but this, along with the whole Sin-Eater thing, was about as gritty as it gets.

Wolverine was already pretty violent, and this issue arrived near the early 90s hyper-violent onset. Introducing Spidey into this world served to juxtapose the two very different characters, and because it’s all grim and gritty it’s one of my favorite Spidey stories ever.

Much of my comic book collection came from my grandma, such as this issue. I remember this from a Christmas batch! Gramma asked me what I wanted for Christmas, and I said, “Comics, duh”, so she took me to the comic book store that same day. This was probably in November.

She let me pick out at least $50 worth of comic books, and this was one of them. Do you know how many comics 50 bucks got you in the early ‘90s? Well, I don’t remember either, exactly, but it was a lot more than today. I took them back to her house and read voraciously, engorging myself on nerdy goodness that day until I read each issue.

I then had to act surprised over a month later on Christmas morning. I unwrapped the box of comics I had already read, and tried to pretend I didn’t already know what was in the box. Or who died in each one. Or which ones came with trading cards inside. Since I’m a terrible actor and liar, my mother quickly knew that I had seen the comics beforehand and her husband encouraged her to punish me. I don’t think I was punished on that specific occasion, though, and I have kept every comic from that batch all these years. Every single one of them reminds me of my grandma.

Condition of My Copy: Pretty grim and gritty, since it’s covered in smudges and fingerprints.