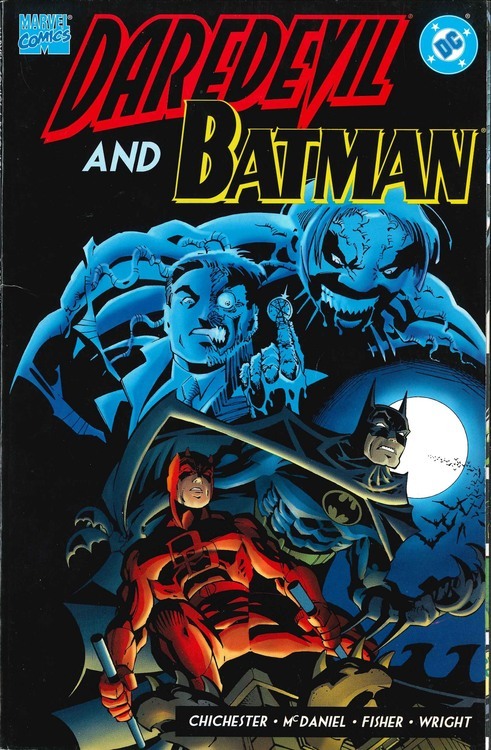 Bats comes to New York on the prowl for Two-Face who has teamed with Mr. Hyde. Upon running afoul of DD, the two have their obligatory scuffle, some banter, and DD reveals his shared history with Two-Face, guilting him into stopping his heinous acts. This issue features a then-revised look for Mr. Hyde.

Well, speaking of the banter, it’s actually quite enjoyably antagonistic and clever: 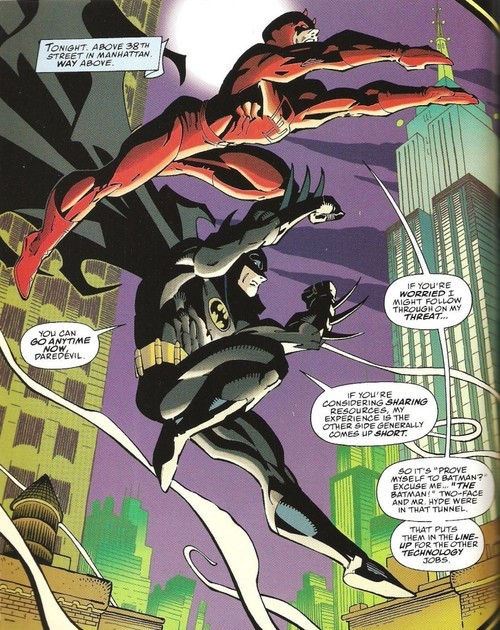 Scott McDaniel’s illustrations are some of my favorite Batman or Daredevil art pieces ever. His style is instantly recognizable, and I used to spend hours trying to teach myself to imitate his methods (I was into drawing as a teenager and eventually developed enough self-confidence to realize that I sucked). I also thought the plot was surprisingly sharp, and I enjoyed the comparisons made between all of the characters.

This is one of the best of the ‘90’s intercompany crossovers.

I was having quite a few emotional issues in school; I was lonely, I dreaded going home because my mom’s husband was an asshole, and I had terrible, queasy-inducing acne, each little whitehead seemingly ready to erupt all over anybody who came near me. This just added fodder to the bullying I received.

There was one girl who had it worse though. I don’t know exactly what her condition was, but she was hyperactive and was incapable of identifying social cues, which made her an outcast. I think her name was Chastity.

One day, Chastity and I were both waiting outside the guidance counselor’s office, and I was reading this issue awaiting my appointment.

“Wow! You’ve got a pizza face!” blurted Chastity, and two other kids heard her and started laughing.

Chastity lit up at the positive attention and began throwing more insults, eliciting more laughter from the other kids. And that continued. For a year. Chastity earned acceptance with the crowd and put an end to her own bullying by bullying me. And I never did much about it, because I felt sorry for her due to her very real mental problems.

I often try to remember the bright side of the situation, acknowledging that my sacrifice spared Chastity’s torment, but really…fuck her.

Condition of My Copy: Some creases along the binding.