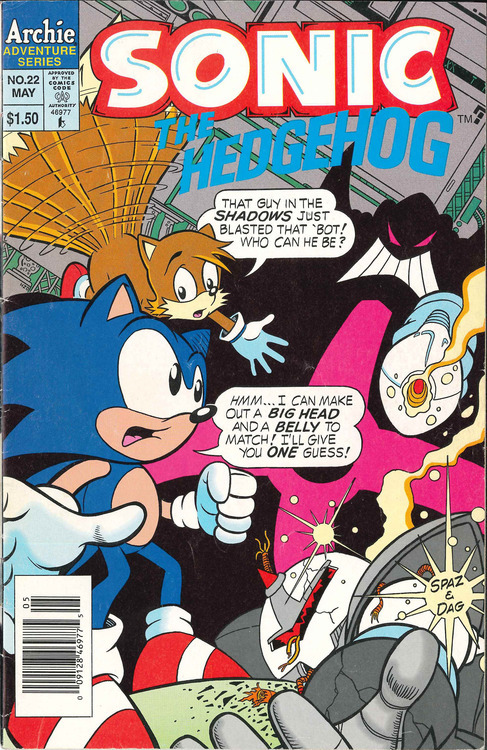 Dr. Robotnik (who these days is called Dr. Eggman because that’s a better name apparently) is bouncing between realities after his latest defeat. He is finally recovered by an alternate, Robotocizied version of himself who is able to restore him to his true time and place. Robotnik arrives just in time to deactivate his “Wasteland” protocols, which is programmed to destroy planet Mobius in the event of Robotnik’s demise.

I kept it because this was the first Sonic the Hedgehog issue I ever owned! Sonic was my favorite game as a kid (more precisely, Sonic & Knuckles). This comic is for a younger audience, sure, but it’s still well-written and balances the child-friendly, cartoonish fun with some serious adventure. That’s probably why the damn series is still going, well over 250 issues now.

In ’95, I took my first trip to the Great Smoky Mountains with my mother, aunt, and grandfather. Excluding animals, I was never really one for nature, and all my family wanted to do was drive along the mountains and enjoy the scenery. So, while they spent their time admiring the foliage, I read this issue in the car, along with others.

My eyes never lifted from this comic until suddenly my aunt shouted, “Bear!”

The car had come to a halt, and I looked up in time to see two baby black bears frolicking before us. My aunt and I stepped out of the car with our Kodak disposable cameras to snap some shots of the little cubs, when, suddenly, we heard a deep huffing. From the side of the road appeared the momma bear, chasing after her cubs and apparently not too keen on us taking pics of her bay-bays. Our asses were sucked back into the car, and we were too freaked to move the car until the bear family had passed. Beranstains they ain’t.

Condition of My Copy: A cover that’s coming loose and some tears throughout, but Sonic is still awesome. Go, Archie! What I wouldn’t give to have this issue autographed!