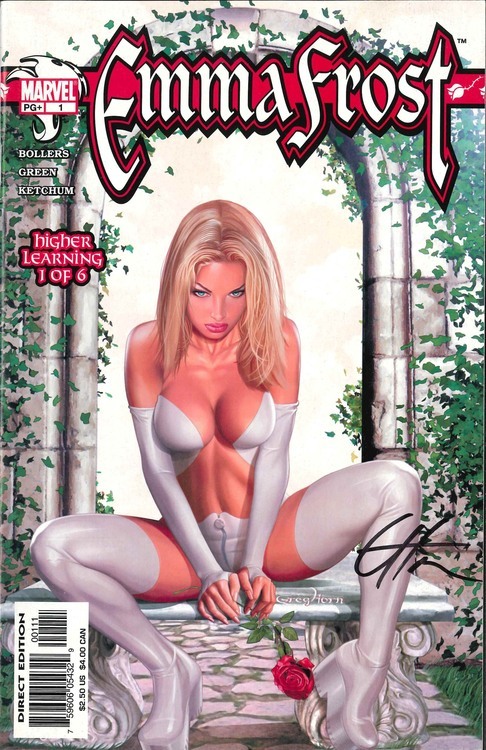 Emma Frost, an awkward, social outcast from an elitist family who suffers from frequent migraines, finds herself unable to live up to her father’s perfectionist demands. At the behest of her teacher that she totes has the hots for, Emma defies her father and attends the school dance, only to result in her mutant, telepathic abilities manifesting violently in front of her classmates, rendering her unconscious in her teacher’s arms.

Because Emma is a bitch, and I love her. The cuntiest of X-Men, this reformed-villainess is my third favorite character on the team. I had not not realized initially that this series would be a prequel series, featuring the origins of a youthful Emma. But I still very much enjoyed the added depths this comic gave to the character, showing us that she wasn’t always the hardened and body-confident seductress that we know.

There was a fellow I used to hang out with, and we went to the comic shop together and bought this issue. He was just as much of an Emma Frost fan as I was.

He was a terrific guy, my equal in nerdiness, and we spent a lot of time together, talking about Emma, and X-Men, and Beast Wars, and all kinds of other stuff. Soon, however, I became so busy attending school full-time, as well as working both a full-time and a part-time job, that I found myself neglecting many of my friends, especially him. After a while, we drifted apart, and he moved on, even moving geographically.

I later learned that he from the grapevine that he had had an attraction to me, and had hoped something would come of it. This made me feel ashamed that I had ignored him as I had, unintentional as it was, and it made me feel even worse to learn (also through the grapevine) that he was very well-endowed.

It all turned out for the best though. I didn’t meet my first boyfriend until years later, but I know that everything worked out for the best. Though I still can’t help but wonder sometimes, because, damn, they say he was HUGE…like beer can huge…

Condition of My Copy: It’s autographed by the cover artist Greg Horn and hanging on my wall, framed, because it just screams “cunty”.