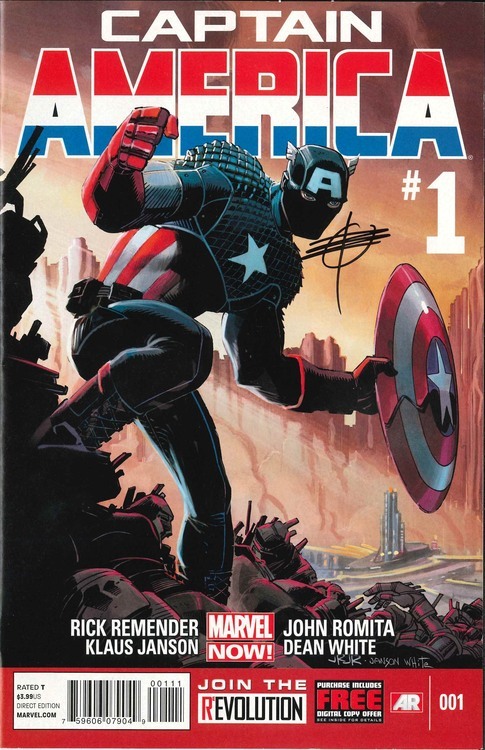 Part of the Marvel Now! event, in this issue, we learn that Steve Rogers is a first generation American, since his parents were Irish immigrants. I have been a Cap fan for a long time,  and I never knew this! Should I have known this, or did Remender just make it up? Well, whichever, there’s LOTS goin’ on in this issue: Sharon proposes to Cap, Cap remembers seeing his mother get slapped around by his father, Cap gets transported to another dimension ruled by Arnim Zola, and then steals Zola’s baby!

Rather than try to follow up the political thrill-ride of Brubaker’s legendary run on Captain America, Remender took the series in a very different direction, which is something I very much appreciate. The result is a story that is unlike anything I have seen in a Cap book since before 9/11. This issue puts Cap in a pulpy, sci-fi adventure setting that is a retro and perfect fit for the character.

John Romita Jr is one of my favorite artists, so the visuals in this book were a real treat. And of all the variant covers that were available for this issue, this regular, “standard” cover is my favorite!

The scenes of a young Steve witnessing domestic violence, and how he learned from it, were very powerful and troubling, adding even more substance to Cap’s already substantive character.

This issue reminds me of the nurse I dated around the time that I acquired it. We had met on a gay “dating” app (they’re sex apps, we all know they’re sex apps), and met for burritos one day. We had a wonderful time, and I made him laugh.

In fact, he said, “I had more fun in that one date than I had in my entire last relationship”.

We met a few more times over the next couple of months and had a lot of fun and laughs when we did. At about month three, though, he started becoming flaky and kept proclaiming that he was “too busy” to see me. So, I told him that, though I was “head over heels” for him, I was moving on, because it seemed he just wasn’t that interested, and I wished him well.

And even though I told him I was “head over heels” for him in the exact same sentence that I broke it off with him, he claimed (to himself and to others) that he broke it off with me. Because, he said, it was “way too soon to be ‘head over heels’ for each other”. I pointed out to him at a later time that that was a ridiculous criticism of me, reiterating that I had only said those words WHEN I TOLD HIM I WAS NO LONGER INTERESTED. But that is the story he sticks with to make himself seem like less of a douche.

But, make no mistake, friends, an act such as that does a douche make.

Condition of My Copy: I had this baby autographed by Rick Remender at C2E2 in 2013, and now it’s framed and hanging above my TV. Winsauce.