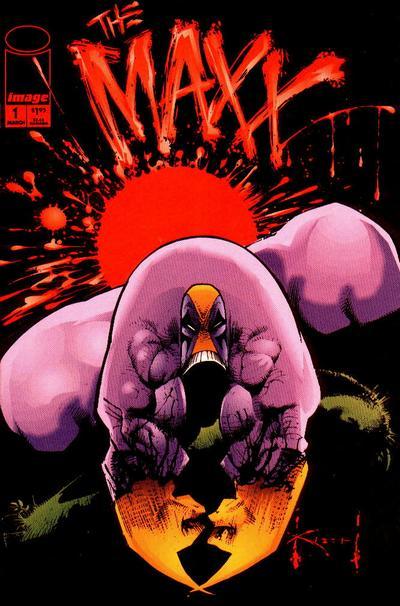 We are introduced to the Maxx, a giant-sized, homeless bum with claws, his world (both of them), his social worker Julie, and his archenemy Mr. Gone. This was a quirky, character-focused series from the beginning, relying on psychodrama rather than typical superhero antics. Sam Keith’s artwork is both dark and trippy with a pulp feel. If you have never read this book, now is your chance, since it’s being reprinted currently. In the mood for some cerebral, existential nostalgia? Then read this book!

The show was an absolute trip; dark and gritty, and it made me feel so grown up watching it. So much of it was over my head at that young age, and I knew that someday I would want to revisit it when I was older. Thankfully, since the show remained nigh verbatim to the comic book, I can do just that as an adult. I can see all of the little details and suggestive humor and situations I missed as a child.

I used to have an older cousin who would come and have sleepovers with me at my Gramma’s when I was growing up. I call him “cousin”, but, in all honesty, I have no clue how or if we were actually related. Apparently we were connected through some obscure means, but no one, including my Gramma, seems able to give me a definitive answer on this. Joey and I used to watch The Maxx cartoon on MTV, and he was the one who introduced me to this comic.

By way of for instance, I was big into Troll dolls in the ‘90s. I say “big into”, and what I actually mean is “I was a fucking Troll hoarder, and if you TOUCHED one of my Trolls I would snap your goddamn dick off!” Most of my Trolls were from garage sales or given to me second-hand or were birthday presents. Gramma even made them little outfits.

So, woe to me when my “Uncle” Jim unexpectedly showed up one day with Joey and saw me playing with Troll dolls. He nearly blew a gasket.

“What the hell’re you doin’?” he shouted. “You shouldn’t be playing with dolls! Boys don’t play with dolls!”

Being a child, I was too intimidated to defend myself. I just sat with a troll in my hand, unable to speak.

“Say something, boy, what the hell’re you doin’ playing with dolls? Girls play with dolls, not boys!”

It was Gramma to the rescue. “Jim, stop it. He’s just a child, he can play with whatever he wants.”

“Just shut up!” she snapped. “Stop making a big deal of nothing. He’s my grandson, and it’s none of your business what he plays with.”

“I might have to stop bringing my son over to play then, I don’t want him to be queer too!”

“Do what you want to do, Jim,” Gramma said flatly. “But leave my grandson alone.”

Jim now lives a lonely life with few friends, no job that I know of, is all around despised by most in his community, is angry, like, all the time, and is raising his grandchild, because his son grew up to be a deadbeat thanks to Jim’s spectacular parenting and his insistence on raising a “masculine” son.

I, on the other hand, grew up to be a “sissy” and am living a happy and fulfilling life pursuing a dreamy career path. Winsauce.

Condition of My Copy: Not Maxxed out yet, despite the past two decades. I found this at a comic convention in the dollar box!