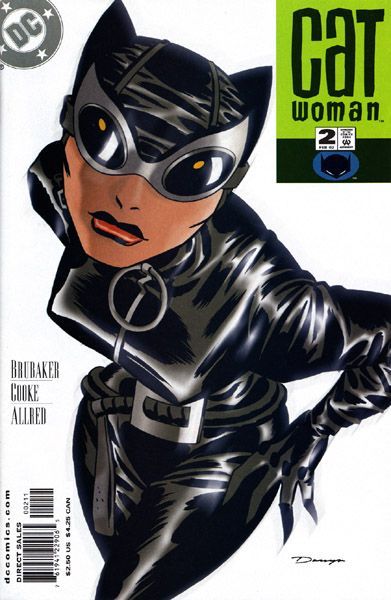 Catwoman is back! Believed dead, Selina returns to Gotham and takes up her old mantle (with some stylish and practical touches), but this time, she acts as protector of Gotham’s East End. Catwoman takes it up on herself to help those who are overlooked by the police and Batman, as she searches for a serial killer who is murdering prostitutes.

I read these first few issues while working at the comic shop, but I didn’t buy them. I have recently rectified that by purchasing the digital copies, and this is some damn good storytelling. I am on issue #16 so far. For a guy like me, this version of Catwoman trumps her 90s and New 52 portrayals by toning down the hyper-sexualization and truly focusing on her character and substantive relationships with her supporting cast. Plus, the sytlized, old-school comic book art throughout this whole series so far has been superb.

I know it’s arguable, but I consider myself a feminist. Though I am a sex-positive feminist, there’s a difference between women choosing to portray themselves as sex symbols, and men choosing to portray women characters as sex symbols. Catwoman has often been a sex symbol, but I always felt like that was a waste of a character; that there was much more going on with her. She had the potential to be more. This book nails it. A tasteful costume, and character driven? Of course, I had to keep it in some form, even if it is digital.

All the Single Nerd Ladies:

I worked at a comic book store in the early 2000s. I was working there when this series began, and it was my first time reading a Catwoman comic. It should have been a dream come true, the perfect job, but it was not. Mostly it was full of drama and snobbery and for the longest time, because of it, I held the impression that all comic book fans are assholes, though it never stopped me from being one (a comic book fan or an asshole).

There was one dumpy lump of flesh that worked there who was just a complete jerk. He talked down to me and frequently treated me like I was stupid, even though I was the one in college and earning a degree. He would even correct me on my opinions, such as informing me that I was a halfwit for enjoying the movie X2 or for enjoying this portrayal of Catwoman (only one of these is debatable). I was active with a rich social life, so I never understood why he felt so superior to me since all he did was sit around all day playing Magic: The Gathering, unless he was just jealous. But jealous of what exactly?

So, after acting particularly uppity to me one day, I got back at him by asking her out. I had come out to my friends, but wasn’t out at this job, so they didn’t realize I was gay. And she said yes. It was a conditional “yes”. Since the manager decreed employees were not allowed to fraternize, she said we would have to go out in secret. This actually gave me an out and exactly what I wanted; I could still shove it in the jerk’s ugly face that she had agreed to go out with me, but not have to actually take her out and waste money and possibly disappoint her.

I did just that. His face turned beat red. His abusive tone increased after that, and it wasn’t much later before I quit. But it was worth it.

Condition of My Copy: Why, oh WHY, did I not collect this series a decade ago!