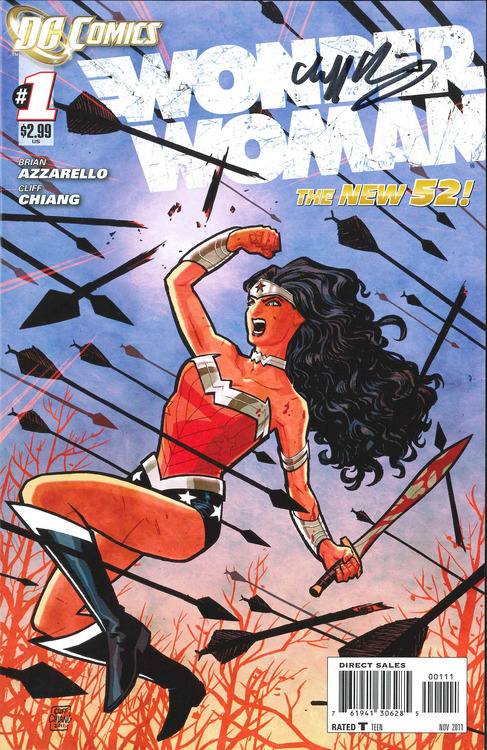 Diana gets the shot in the arm that she’s needed for years, as she embarks on a mission to protect a young woman and her baby from threats from her revamped mythical history. This is the best to come out of the New 52, and Wonder Woman has never been portrayed better artistically.

This is the first time I have ever loved, truly loved, a portrayal of Wonder Woman. She is a tricky character, and I do not envy any writer or artist assigned to her. Her fanbase is vehemently divided about what constitutes a proper WW portrayal. Her history and powers are so convoluted, that choosing any particular “classic” version pisses some of her fans off. Doing something new with the character, pisses some of her fans off. But this, THIS, is at least an awesome story, so even the “purists” who want a “classic” Wonder Woman will have a hard time genuinely disliking it. I happen to love it so much, I intend to collect Azzarello’s entire run.

When this issue was released (actual release was September like all the first New 52 issues) I was living in one of those bad situations. I had moved in with a good friend of mine (at the time), and unfortunately he was a bartender whereas I had a day job. This meant, naturally, I slept at night while he slept all day. He also had a boyfriend who was a bartender and all of his friends were bartenders. Yeah…no sleep for me.

One very, VERY early Thursday morning (oh, about 4 or 5am) I was awakened to the sound of laughter and what can only be described as hootin’ and hollerin’ of all varieties. I put a pillow over my ears, considering for a moment putting it over my face, and began to doze back to sleep when I then heard a commotion going on outside. Peering out my window, I saw my roommate and his friends in the backyard roughhousing in the mud like a group of schoolchildren. Adult gay men rolling around in mud may be hot to some, but I was scheduled to be at my job at the library at 8:00 in the fugging morning, so I found it far from arousing.

I tried to go back to sleep again, but was interrupted by two of his friends dropping utensils and kitchenware and talking about gay drama. I finally decided that my efforts to sleep were futile, and got dressed in my work clothes, despite how early it was. I marched downstairs, and they all paused when they saw the look on my face.

“What the hell are you doing?” I said. “It is still dark out, I have to work, and we have neighbors! And you’re wrestling outside, making all kinds of noise, like a bunch of children!”

Never did I think I would find myself, the forever manchild who reads comic books and watches cartoons, lecturing other adults about acting like adults. I stomped out of that house and drove away, killing the next few hours until work started with some comfort food and good reading, including this comic.

I received multiple texts that day from my roommate and his friends apologizing for waking me up, and, though I accepted their apologies, it was the beginning of the end of that living situation.

Condition of My Copy: No mud stains, and autographed by the artist!