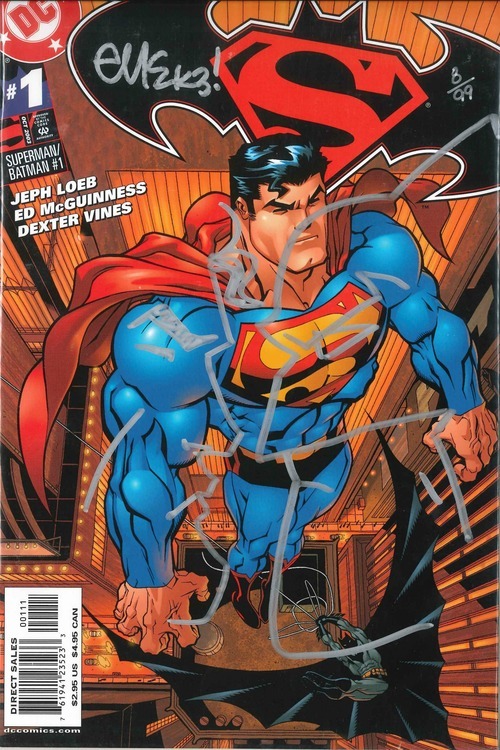 Batman is investigating a slew of grave desecrations in a Gotham cemetery when Superman whooshes by to say hello. Explaining that he’s not just in the neighborhood, Supes recently had a run-in with the kryptonite-powered villain Metallo, whose former human body is buried in the cemetery under his former identity of John Corben. Metallo seems to be up to something, and Superman wants Batman’s help finding out what. Metallo suddenly appears and attacks the heroes, shooting Supes in the chest with a kryptonite bullet, which actually seems pretty smart and makes me wonder if this is really the first time it’s been attempted. 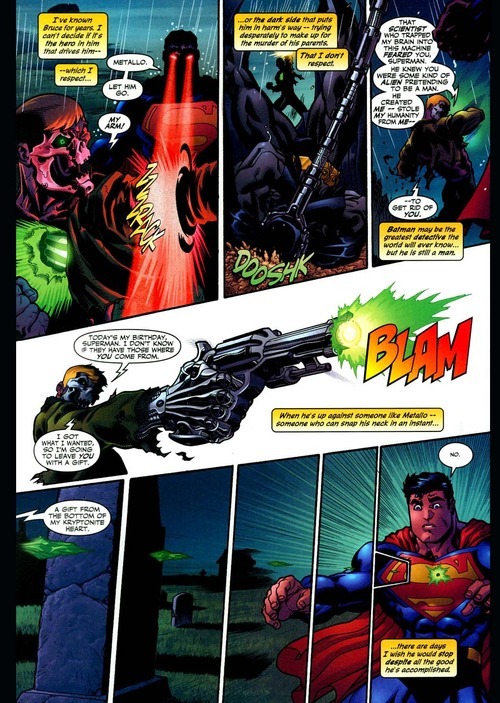 Bats blows up Metallo with some explosives, then attempts to quickly remove the kryptonite from Superman’s chest while the mechanical menace reconstitutes. Unfortunately, Batman’s surgical skills are not quite fast enough, and the two are buried alive together when Metallo recovers.

Meanwhile, President Lex Luthor, who has messed with Superman and Batman on many occasions, is informed that a meteorite composed of kryptonite is headed to Earth. He decrees, ominously, that Superman will not be informed of this imminent peril, setting him up to the big bad guy for this story arc.

If there’s one thing I like more than a Superman or Batman story, it’s a Superman and Batman story. And I don’t mean no Justice League crap, I mean a team-up of just these two characters, a comparing and contrasting, which brings out the best of both. Speaking of comparing and contrasting, this issue is full of those great little moments. It explores the obvious elements that make the two opposites, the superficial ones, but it goes deeper by comparing the shared tragedy of their origins as orphans and how these events shaped them into such different heroes. 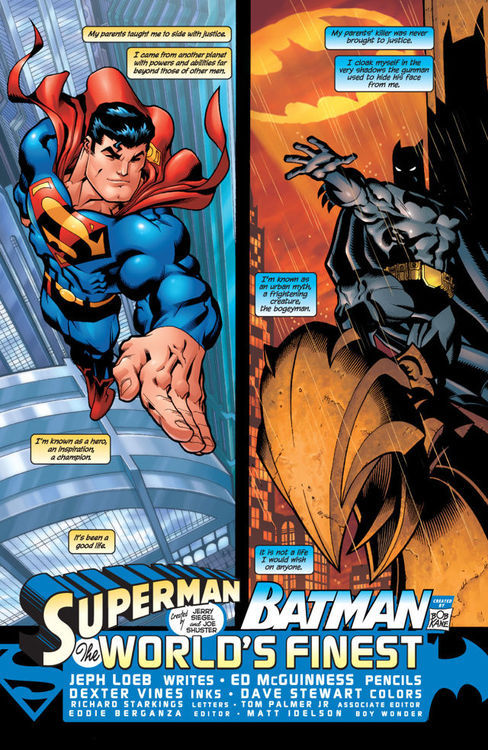 Any comics fan knows that Superman and Batman have a long and varied history as partners and friends throughout their mutual publications, even earning the monicker of “World’s Finest”. When this relationship is the best, in my opinion, is the modern age when the two are not “best buddies” but are reluctant partners who have to suffer through the temptations of antagonizing each other to get the job done.

This entire story arc is solidly written by Jeph Loeb, which is no surprise. His work at DC is the stuff of legend and he has crafted some of the most definitive stories, especially for Batman. Ed McGuinness’ artwork is thrilling to look at. He is one of my favorite comic book artists to be sure, but he is HANDS DOWN my favorite Superman artist. I mean, look at that! LOOK AT IT! He gives Supes that larger-than-life look for a larger-than-life hero, an all-American look, a classic-yet-contemporary look. Just look at how fugging cool Supes looks!

This story arc was later adapted into a straight-to-DVD animated movie, which was kind of neat.

I first read this issue in the spring of 2004, on a greyhound bus with a bunch of classmates, on the road to Canada. It was my first class trip to the Stratford Shakespeare Festival during my time at Otterbein College. This was a trip open to English majors and theatre majors, and, believe me, on that bus you could tell who was who. The theatre majors would congregate and wave their hands and burst into song and spew nonsense from their mouths and say every-fucking-thing with a loud, dramatic flair as though all of us wanted to hear…and this is coming from a guy who can be loud and dramatic with the best of ‘em.

Joining me on this trip was my friend Sarah and some hot guy, whose name I have already forgotten. He was tall and lanky with a deep voice, and he was pretty smart too. I had only been out for a year or two at that point, and so my gaydar wasn’t quite established. I mistook the guy for gay and became very forward once we all went out drinking. He let me down easy, told me he was flattered, but that he wasn’t gay. Due to our hotel arrangements, he and I ended up sleeping in the same bed that night, which should have been awkward, but he was totally cool about it. In fact, he was more than cool about it for the entire trip, and we hung out and sat next to each other for most of the plays we saw. Having someone be completely comfortable and not offended after I mistook them for being gay really helped me feel less ashamed and more secure with my own self.

By the way, the plays I saw on this trip were A Midsummer Night’s Dream and Macbeth which, OMG, are my two FAVORITE Shakespeare plays EVER. But then I also had to suffer through Guys and Dolls, and I really hate musicals. We English majors held the two Shakespeare plays in reverence and spent hours letting our excitement out after the performances through intelligent discussion and Long Island ice teas. The theatre majors preferred Guys and Dolls which they celebrated by performing the songs and lines themselves, as if they were trying to outdo the actual performers.

Those people were crazy, I tell ya, crazy, and now they are probably all working as bartenders or singing at the Dixie Stampede. If they’re lucky.

Condition of My Copy: Not to be loud and dramatic, but it’s in fabulous condition, since it was purchased already autographed and sketched by Ed McGuinness at a comic shop with the certificate of authenticity.