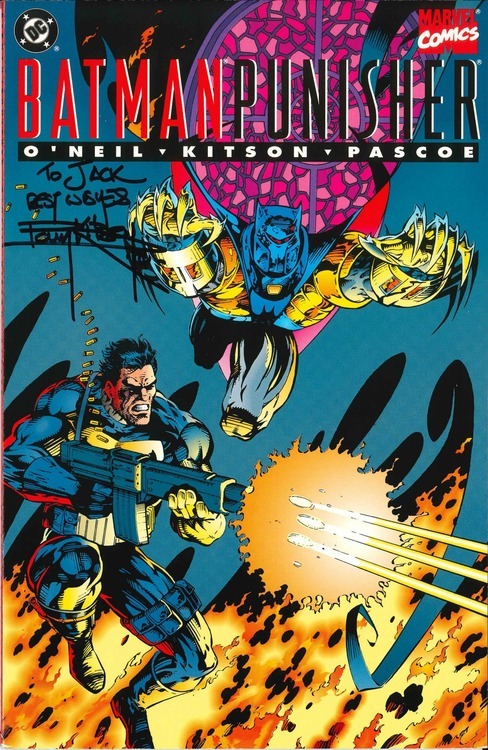 Jean-Paul Valley, the new Batman who is even more schizo than the last Batman, is suffering from terrible visions of a river of fire due to his brainwashing at the hands of a sinister cult. Yeah, seriously, Bruce chose this guy to be Batman in his place. Come on, ‘90s DC writers, just…come on. 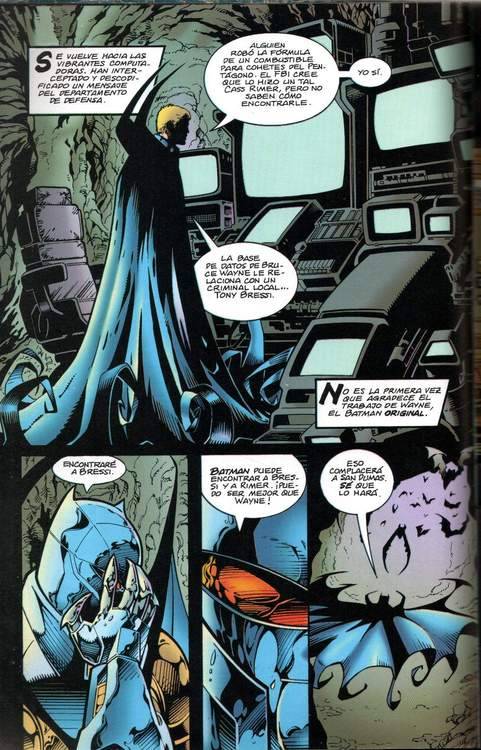 Jigsaw is working with some mysterious partner, and he plans to introduce a chemical into the Gotham River for some reason, setting the entire city’s water supply literally on fire.

New Batman and Punisher have their initial throw down, which ends in a temporary truce. Batman vows to bring the Punisher to justice (which is the reaction of most super heroes upon encountering the Punisher, seeing as he is technically a serial killer and all) after they stop Jigsaw’s evil plans.

Punisher manages to ditch Batman, using the loony hero’s intel to find Jigsaw, while Batman prevents the tainted water from reaching the river. Frank throws Jigsaw off a building, only to have Batman rescue him and tie him up. The two have another slugfest, with Punisher escaping yet again. 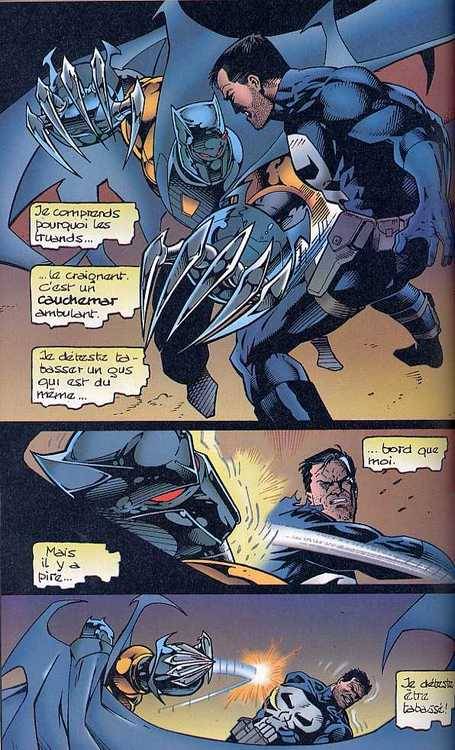 Jigsaw is freed by the Joker, who is revealed to be his secret partner.

Would you believe this is the first Batman comic book I ever read? Yes, this. The one that is an oddball crossover and has the real Batman nowhere near it. Despite the oddball-ness of this story (which to be fair, mostly comes from the DC side of things. Having the Jean-Paul character as Batman was an okay element within the context of the overall “Knightfall” story, but separate it out as a stand-alone like this and it makes fuck-all sense), this comic is well-written and enjoyable, especially when we get to see the Punisher consistently one-upping the unstable Batman.

Writing credits go to Denny O’ Neil, who is one of my faves. He is the man responsible for the acclaimed Question series from the ‘80s, and one of the guys who was on that wave of writers who wrote more mature stories for more mature readers. Seriously, I have got to get this guy’s autograph…

Also, the art by Barry Kitson is so wonderful and gritty, and the colors just pop. The panels in this thing should be iconic images, with such attention to details (such as the tainted glass on the cover) just really augments this book.

We were watching The Little Mermaid in class one day in elementary school so the teacher could grade papers or something. As the movie played, I found myself unable to pay attention. All I wanted to do was read this comic book right here which was in my book bag.

Unfortunately at this time, teachers still frowned upon comics and didn’t consider them reading, so I knew that I would have to read it in stealth, otherwise the teacher would might take it away and force me to watch the movie.

I held the comic discreetly on my lap, head up but eyes lowered, gently turning the pages. However, I had a nasty habit of…how can I describe this…I had compulsion, really, at the time of vocalizing all the onomatopoeia I encountered in comics. Apparently I got so lost in the comic and forgot where I was, that I started doing this, because a red-headed girl with freckles turned to me and went “SSSSSSSSHHhhhhhhhhhhh!” very violently.

The teacher came to see what was going on, and I was busted with the comic in my lap. But she didn’t take it away. This was Mrs. Gus who, I would later find out, really liked me and appreciated my creativity.

So, she whispered, “You need to make sure you read quietly to yourself. Okay?”

I nodded with a smile, apologized, and finished reading my comic to the tune of “Kiss the Girl”.

Condition of My Copy: Totally stable, and autographed by artist Barry Kitson just two weekends ago at Ohio Comic Con!