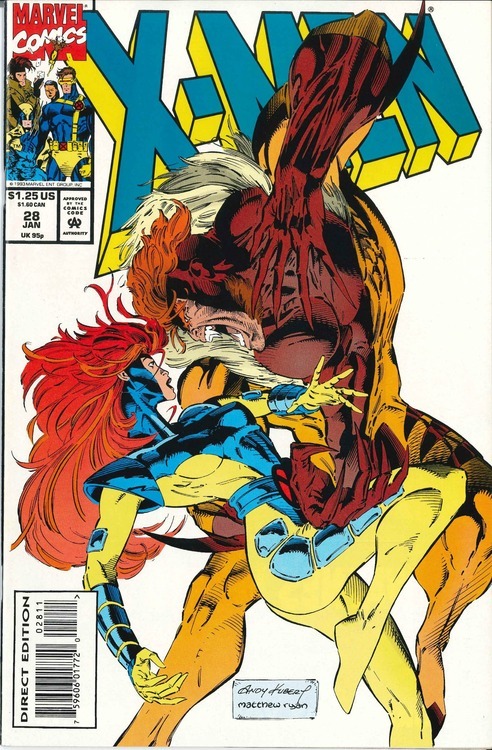 The X-Men Blue Team meets at a café to discuss how much they hate their new roommate, Sabretooth, whining about Professor X’s decision to take in the multiple-murderous, bloodthirsty, feral, mutant serial killer for rehabilitation…wow, spelled out, it does sound like a shitty idea. And he’s giving poor little Jubilee nightmares!

Rogue tries to show Sabretooth by bringing him some raw meat, much to Gambit’s chagrin, and Sabretooth throws them some cryptic sass while he noms.

Jean decides to challenge Sabretooth and smacks him around with her telekinesis in the hopes that’ll learn ‘im. Being the very obvious champion of the spat, Creed continues to be belligerent, insisting that he will never change, threatening the lives of everyone in the school. 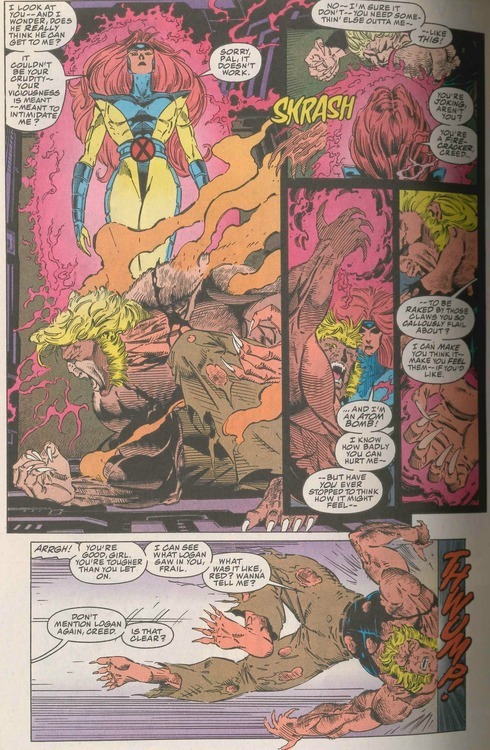 Jean realizes what a pathetic creature he truly is, a slave to his own addiction to killing, and turns her Kubert-illustrated butt on him.

A lot of seeds of the one of the most memorable X-Men runs of my childhood are planted here. This issue foreshadows the bloody battle between Sabretooth and Psylocke. It also lays the groundwork for the dark connection between Sabretooth and Gambit, giving us a glimpse to just how shadowy Gambit’s past truly is and making us question just how much he’s hiding. Andy Kubert’s art is hardly my favorite, but I do recognize it has a sort of “X-Men standard”, focusing on the curves and bulk of the characters.

My favorite moment in this issue, and one that is later recited in the Sabretooth one-shot, is Jean’s warning to Creed, “You are a firecracker, I am an atom bomb.” God, that’s a great line. I can’t tell you how many times I have fantasized saying that to a high school before whooping him into submission, which is exactly why nerds love comics.

This is the first issue I ever received in the mail. It was the first issue of my first subscription to a comic ever and it was a Christmas present. I received this issue in the mail on Christmas Eve and read it Christmas morning after opening presents. These presents included…oh baby…a SEGA GENESIS FEATURING SONIC THE HEDGEHOG 2! And yes, ladies and gentlemen, I actually waited to set up and play the Sega Genesis until I finished reading this issue. I have always been more of a comic geek than a gamer, and always will be. This is just a perfect example. Besides, games are expensive and time-consuming, ugh. Games take away from my reading time, people!

Condition of My Copy: It’s a firecracker.

Ad Aware: That Spider-Man/X-Men game for Genesis is one I regret never playing, even though all my peers said it sucked. I used to love going into Kaybee Toys at malls and exploring their action figures. Shit, are those stores even still around? 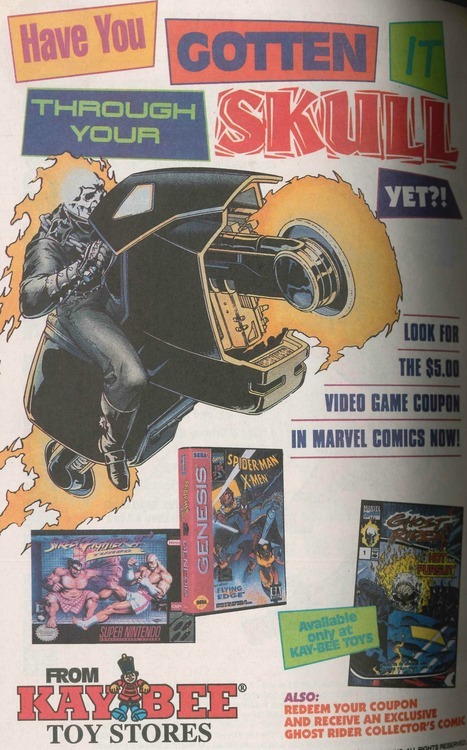