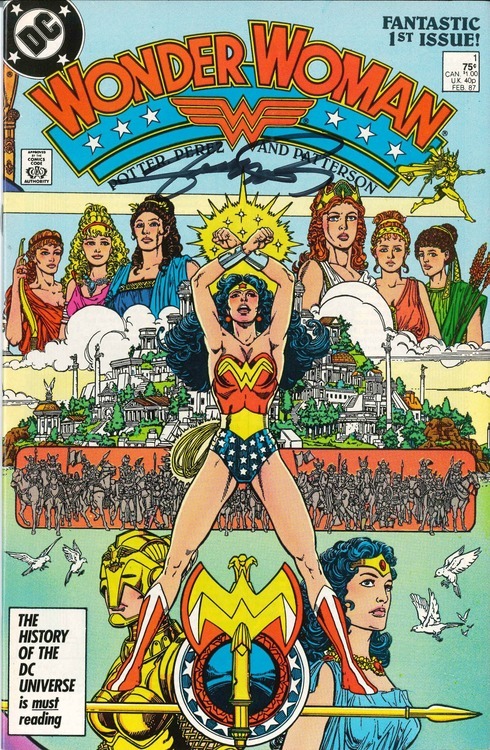 Wondie (and the rest of the DC Universe) is given a much-needed, colorful ‘80s reboot! Within is an updated origin for the Amazon Princess, taking us further back than ever before! Revel at the creation of the Amazons, a race of immortal, warrior women who are born from the earth, resurrected from the souls of abused women throughout human history and prehistory (no really). Marvel as the Amazons are imbued with abilities and grace from the gods and goddesses who love them! Tremble as the Amazons are tricked and subdued by the Greek “hero” Hercules! Be in wonder of this magnificent history, culminating in the magical appearance of Diana, princess of the Amazons, born of clay! She has a world of adventure before her… 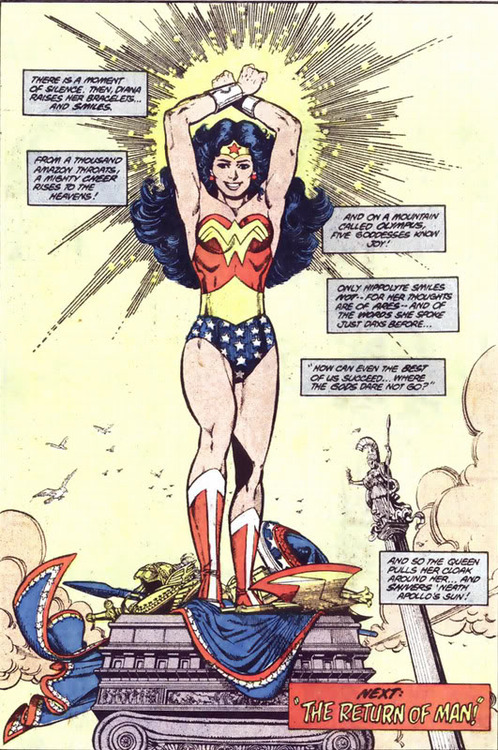 Also, this issue has no ads, which was unusual for the time.

It’s so pretty. George Perez’s artwork is mesmerizing through and through, not to mention his storytelling abilities. 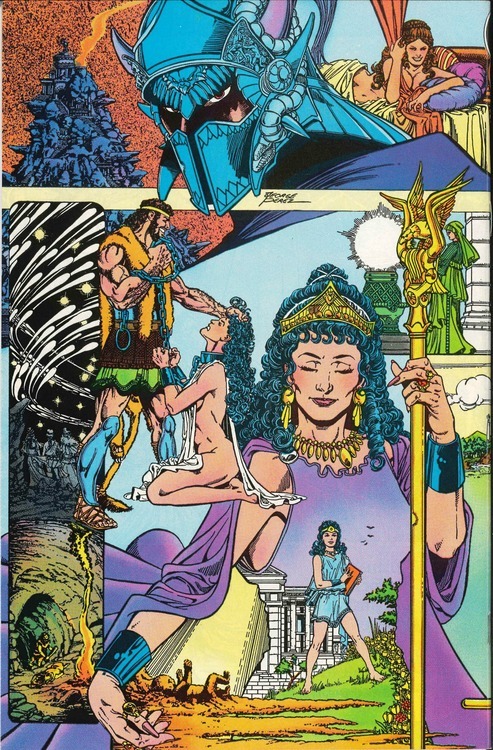 Mr. Perez has said (to ME) that he accepted taking on Wonder Woman because he wanted a challenge. There’s nothing more challenging than trying to make Wonder Woman cool.

It’s impossible to exaggerate how important this comic book is to the history of WW. Though she is one of the most recognizable fictional characters in the world, it is an unfortunate fact that Diana has never had the financial or popular success of her male counterparts. Along came George Perez with this masterpiece, updating Diana for a new era and attracting a new generation of readers.

I bought this issue, plus the 19 issues after it, at Wizard World Ohio in 2012. Found ’em for a steal. I mean, seriously, 20 issues for, like, $15. I went with two friends of mine named Bill and Steve, and this is when I FINALLY decided to watch Doctor Who.

See, I have always believed that my nerdiness had a ceiling, and that Doctor Who was way over it. It just looked so corny and hammy and…British. Despite many of my friends saying that it was worthwhile, I adamantly refused to watched it, because I wasn’t that nerdy.

But at this comic con, I was bombarded with Doctor Who. It was everywhere. Freaking. Every. Where. Booths, toys, cosplay, remote-controlled Daleks, etc; I swear there was more Doctor Who stuff there than comic book stuff. Bill began describing why he loved the show, telling me all the wonderful and surprisingly profound things the show had to offer. So, my inner nerd screamed, “CHRIST, OKAY, FINE, I’LL WATCH IT!”

I watched my first episode that night (after reading this comic, of course). Yeah, it’s pretty good. Both, I mean.

Condition of My Copy: As radiant as Diana herself, and autographed by the wondrous George Perez.