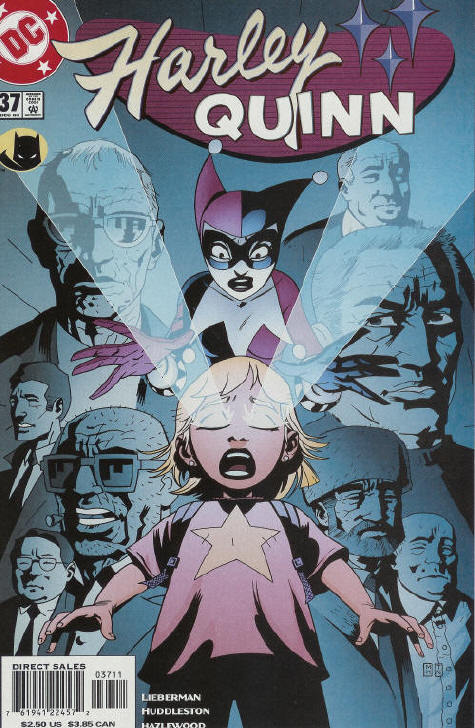 Harley is in possession of something valuable. All she has to do is cash it in. This valuable something is a scrappy young girl named Amanda with a code implanted in her eyes that is worth a “ridiculous amount of money”. Once her eyes are scanned to retrieve the code, Amanda will go blind within two hours. There is a single doctor in Gotham who could save Amanda’s sight once scanned, but only if she can get to him in time.

Every criminal in Gotham is after the girl, all having been hired by a mysterious man named St. James. 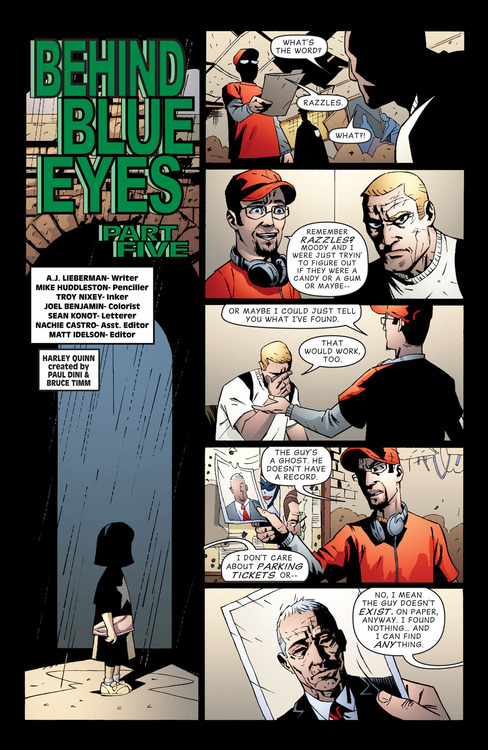 But Harley manages to save the girl from the clutches of other criminals time and again in hopes of keeping the full value of the code for herself. 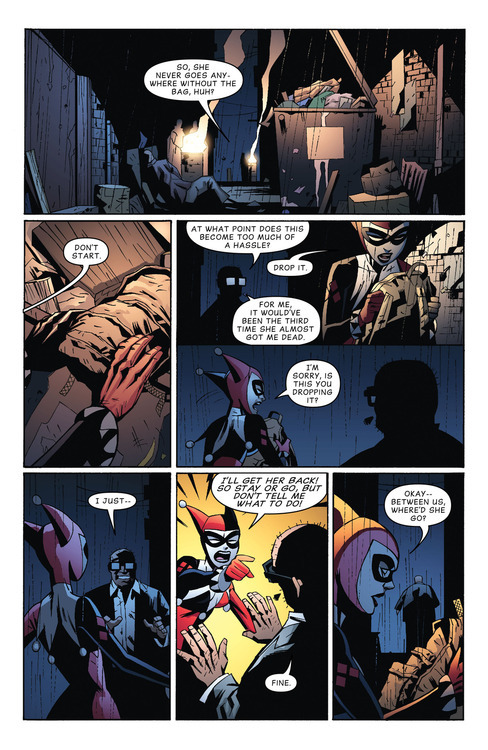 Harley explains that she wants the money, but she is not heartless. She doesn’t want to harm the girl. So, she makes Amanda a promise; if Amanda will willingly allow her eyes to be scanned, then Harley will take her immediately to the doctor and protect her until he can reverse the process. Harley will get the valuable code and the money, and the girl gets to keep her sight.

But after Amanda’s eyes are scanned, St. James cunningly kidnaps the single doctor who can help. He gives Harley an ultimatum, demanding the code for the doctor, while the clock ticks quickly for Amanda’s eyes. He appeals to the former doctor within Quinn, recognizing that she would surely never allow an innocent child to be harmed for the sake of greed. Harley may be a criminal, but she could never do something so evil.

We learn Harley’s decision on the final page, and you might just clutch your pearls upon reading it.

Harley is my favorite Batman villain, and one of my favorite characters, period. Though it is my understanding that the readership began to decline during this run on the book, I think the real losers are the ones who stopped reading.

Yes, gone are the screwball antics, the “t & a” art, and the fourth-wall breaking. But what we get is a grittier, harsher Harley who is still fun; a career criminal who is quirky enough (or insane enough) to perform her crimes dressed as a jester, not a far cry from Batman himself. The artwork is dazzling in its minimalism, particularly action scenes which reduce Harley to a stylish, pointy silhouette.

One of my favorite things in this world is taking a female character who is typically pushed by her sex appeal into the faces of fans, and altering her tone to reflect on her other aspects. This book is very similar in that regard to the Catwoman series which was running at the same time, which I also love.

And this issue…I mean, seriously, wow. Just wow. It tugged at my heart and blew my mind. Throughout this entire series, Harley was portrayed as an anti-hero, and then this issue reminds the reader what is really at the character’s core and what she is capable of. How is this seriously not regarded as the best of the series? I don’t understand why this issue and this run don’t seem to be remembered the way they should be!

This issue will always hold a special place in my heart, because I bought it and read it the same day that I came out to one of my friends for the first time. I was still in college and so were my friends, though we were all living in different places. I was a year behind most of them, so I still lived in the dorms. One day, my head just started spinning. I nearly had a panic attack, I felt like I was going to explode. I was gay. I knew that I was gay. I had admitted it to myself, and now the shame and fear of the unknown was making me crazy. I had this irrestistable urge to not hide anymore, to be myself, to not wear a disguise, but I didn’t know what to expect.

Being closeted is absolute misery. It’s a horrible, disgusting, shameful place to be, because that’s how you feel. That’s why you’re there. You’re worried that you’re a horrible, disgusting, shameful creature, and that no one will accept you. You’re afraid you will lose everything that you have. But who wants to keep feeling that way? I realized, finally, that the only way out of that mess is to just open up. The only way to stop being terrified of what might happen, is to find out what will happen.

So, one evening, I drove to the apartment that three of my friends shared, hoping that my friend Jeff would be alone. Jeff was of a particular, liberal, accepting, and gentle nature, and I knew I wanted to tell him first. I knocked on the door, and Jeff answered. He was alone, as I had hoped. He could tell that something was wrong.

We sat down on opposite couches. I told him I needed to tell him something, and that it wouldn’t be easy. He told me I could tell him anything, and for me to just take my time.

Finally, after some heavy breathing, I said, “I’m a goddamn homosexual.”

And his response, with little hesitation, was, “Okay. Well, I hope you don’t think that changes anything between us. I promise you that.”

The tears flowed down my cheeks for most of the night after that. All the anxiety and all the fear and all the shame that had built up, that had been flooding within me…it began to pour out and be released with those tears. Those tears carried away that shame out of my soul and onto my sleeve where it belonged. Because shame ceases to be shame once it is on your sleeve, open and exposed for the whole world.

To this day, tears will begin welling in my eyes if I look at this cover too long. Does the cover itself have ANYTHING to do with coming out? No. But I read this issue that day as a way of calming my anxiety-ridden mind, and this issue was still waiting for me, sitting there on my bed, as soon as I came home after coming out. So, the two will always be linked in my heart.

Happy National Coming Out Day, everyone!

Condition of My Copy: I have been very careful to not get any tear-stains on it.