WITH THE RELEASE OF THE AMAZING SPIDER-MAN #1 THIS WEEK, I thought I would write about my memory of the last time Amazing Spidey relaunched. 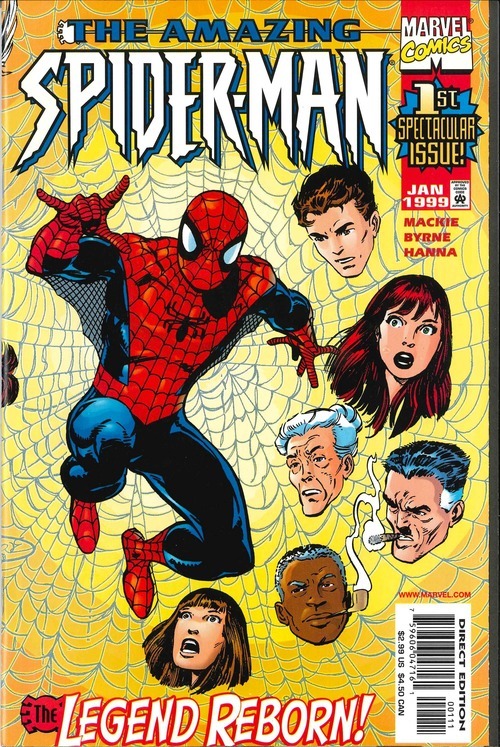 From the ashes of the “Final Chapter” storyline, Peter has quit as Spider-Man…again. Didn’t he just quit a couple of years before this during the “Clone Saga”?

Anyway, the other heroes of the city wonder where Spidey has gone and reflect upon what he means to them and the city. Then the Scorpion shows up battling a new Spider-Woman who is…she was…you know what? Who cares?

I can’t. I just can’t right now. This book was awful.

AND did you read the issues before this??? That whole “Norman Osborn / magical cult / new Spider-Woman” nonsense??? Oh lord…gag me! Shit, John Byrne, just…shit.

Fuck, I dunno…cynicism? This was a terrible stunt that backfired. I guess I kept this issue because it’s so damn bad. I mean, John Byrne is a legend, he’s done some amazing things, but did you read Spider-Man Chapter One? It was terrible! And this follows it and the corrupted continuity it established and which was swiftly ignored by later writers.

The relaunching at a new #1 didn’t even last, since Marvel soon returned to the original numbering. So, then this is…The Amazing Spider-Man volume 2? It shows up that way on Marvel’s wiki. Then why was #700, released just over a year ago, still considered volume 1? Is the #1 released this past Wednesday volume 3?

You know what? Who cares! I’m sorry I brought it up! Let’s just go back to pretending this never happened.

No. Nuh uh. Not doing it. I have no significant memory attached to this issue other than being in the car with my grandmother and explaining to her how much the Spidey books had sucked for so long. And the new Spider-Woman…gaw…were they serious about that?

Look at me, I’m still talking about it. No, I’m going to stop talking about…this never happened…okay? Spidey books are so incredibly good right now, why look back at such dark days. Why did I bring this up? Oh, gaw, why do I still own this???

Condition of My Copy: Shhhh….shhh….hush…it was just a bad dream.