I JUST SAW THE AMAZING SPIDER-MAN 2, and it wasn’t nearly as bad as it looked like it would be. Same symptoms as Spider-Man 3, but far better execution. 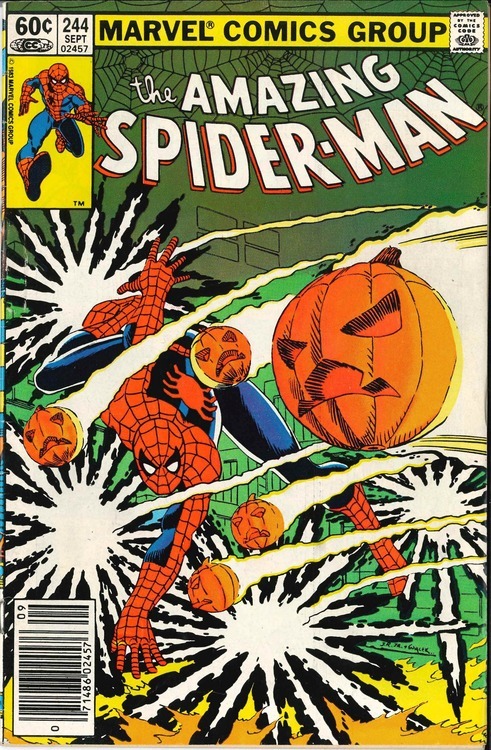 A series of thefts have been taking place at Oscorp, and Spidey investigates, fearful that the Hobgoblin is stealing the materials needed to grant him the superior strength of the original Green Goblin. This issue leads us to believe that the Hobgoblin may be Lefty Donovan (we would not learn his true identity for years to come) and completely ignores the fact that hobgoblins of folklore were helpful house sprites.

There are certain characters, I think, who are for more menacing and have much greater impact dead than alive. Examples would be Jean Grey, Jason Todd, and Norman Osborn, the Green Goblin himself.

Before Norman was ill-advisedly returned to life in the ‘90s, I always loved how he still maintained a haunting presence in Spider-Man’s world in the form of legacy characters such as the Hobgoblin. The Hobgoblin was originally frightening because, unlike his green predecessor, he was perfectly sane and calculating in his use of the Goblin weapons.

I remember buying this issue from the comic store’s backstock when my first little cousin was born. I have two cousins who are older than me (both pretty psycho…okay, one is WAY psycho) and two cousins who are younger than me who are the sons of my youngest aunt and who are (like the Hobgoblin) perfectly sane.

She gave birth to him about sixteen years ago. Wow. I mean, just…wow, I should feel old, yet I don’t. Anyway, i think things were pretty rough for her during the delivery, and she required a C-section. I read this issue in the hospital, waiting for my turn to see the new baby.

He was the newest of newborn babies I had ever seen. He was this helpless, little, rolled up little ball of squish, with itty bitty wittle fingers. But he was gross. I mean, really gross. His head was malformed and he was all wrinkly. No one had ever told me that newborns were so goddamn gross! Everyone was fawning over him, but he was just…ew! His mother said he was, “Perfect”, and I remember thinking that that’s just a thing mothers say, because goddamn was that an ugly baby!

I can’t believe he’s sixteen now. He just got his driver’s license. He’s all lanky and awkward. His voice cracks. He even has a girlfriend. And he’s really smart and scrawny like I was at his age (though i suspect he’s much more popular).

Condition of My Copy: It’s one of my babies! An adorable and not squishy baby! This issue is nearly as old as I am, and it is in great condition.