IT’S AMAZING SPIDER-MAN 2 WEEK, AND SO FAR THE REVIEWS HAVE BEEN FAVORABLE! Let’s share some Amazing Spidey memories this week! 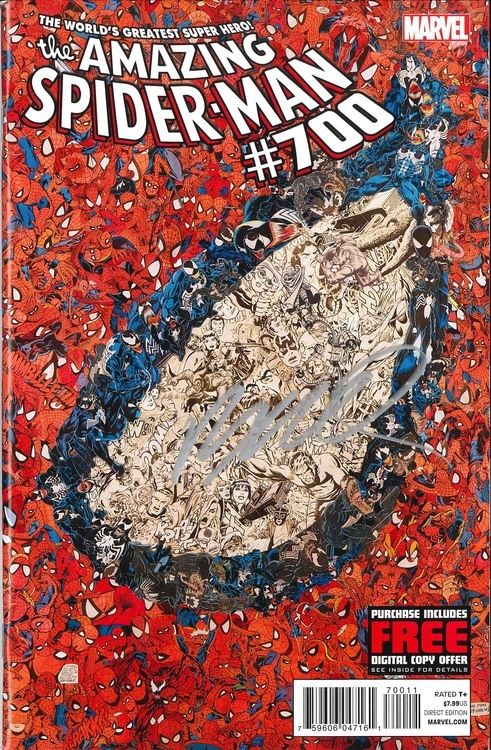 It’s a race against time as Peter Parker, now in Doc Ock’s quickly dying body thanks to a mind-swap, takes desperate measures to return to his rightful body, but fails, finding himself outwitted by Doc Ock at every turn. In one final effort to set things right, Peter forces his own memories into Ock’s, flooding the villain who stole his identity with every heartache, torment, triumph, and every motivation he had to become Spider-Man.

Doc Ock realizes his error, recognizing that he’s the villain who has done a great wrong, but it is too late to correct it. He vows to be a hero and carry on Spider-Man’s good work as Peter fades away, dying as Octavius’ body takes its last breath.

Oh, god, is that a tear? Can I not even write about this issue without crying? Fuck.

Peter Parker is my favorite, single superhero. Doctor Octopus is, all eight hands down, my favorite super villain. So, yeah, this was an important to me. Was it a gimmick? Honestly, barely. Dan Slott tells such a wonderful, fast-paced, meaningful story in these pages, that the “Death of Peter Parker” actually has impact! In fact, no death has had greater impact since the death of Superman, if you ask me. I feel that a story that is genuine through and through is not a gimmick, even if it is marketable. The twists and turns of this book made me cringe, shout out loud, and even form tears while reading it. We all knew Peter would come back, and Dan Slott wasn’t trying to fool us otherwise. This still had meaning.

Since moving about a half hour away from Columbus, OH to the middle of nowhere, I found myself nearly an hour away from the nearest comic shop. Therefore, the most logical solution to getting my most beloved comics each month was to order subscriptions, which I did for The Amazing Spider-Man, because Dan Slott.

However, when I expected to receive this issue, it never came. I waited days, and it never came. Then I got the issue after it, which was the beginning of a new series. I then realized that, since this issue was priced at $7.99 but my subscription price was factored using the usual $3.99 price, I must not be getting this issue because it was so special.

Thus began the journey to find a copy of The Amazing Spider-Man #700 for less than $10. It seemed impossible. The issue had sold out, fast as lightning, and that had been days ago (ultimately, it warranted at least four reprints, I believe). Retailers at that point were charging up to $50 for this ish. I scoured the Central Ohio, either visiting or calling every comic shop within 100-mile radius, as well as perusing eBay but to no avail.

Then one day, I happened upon a Barnes and Noble. l entered to kill time before a movie and the idea hit me to check their magazine section, where many B&Ns kept comic books. There, peeking out from behind an unrelated book, I spotted it; a single copy of ASM 700. Their last one which had somehow gone unnoticed.

Barnes and Noble, naturally, charged me the cover price, not being in the comic book-y business of marking them up based on collector’s value, and I felt very fortunate to have picked it up for less than $10.

And wouldn’t you know it, after all that mess…my copy finally came in the mail. Turns out I was mistaken, and I was too receive a copy despite the higher price. Whichever neighbor accidentally received it finally decided, after weeks that they would drop it in my mailbox. Bastards. I gave my extra copy away to a fellow nerd at a convention.

Condition of My Copy: Signed by artist Humberto Ramos!