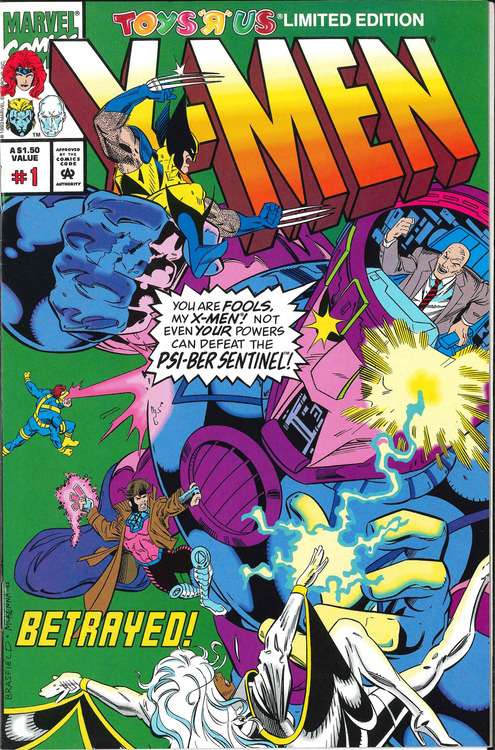 The villain Gideon uses a psionically-controlled Sentinel and a vile brain creature to attack Professor X and the X-Men, kidnapping Karma for some reason. The X-Men launch an assault on Gideon’s base, only to be ambushed by some of their greatest enemies. The X-Men beat them up, rescue Karma, and run away in heroic poses.

I have no idea how I got this issue. I really don’t. As far as my memory serves, it just appeared in my comic box one day, but I have no clue where or how it came into my possession.

Anyway, it’s not a very good story. But it wasn’t supposed to be. This issue is filled to the brim with characters and vehicles which had action figure counterparts on Toys “R” Us shelves at the time (yes, including Gideon), which I’m sure was entirely a coincidence.

This issue was, however, a great crash course into the X-Men and their world for new readers. It is a lot of fun to flip through this issue and reminisce over all the Toys “R” Us ads, featuring SNES and Sega Genesis games like Sonic the Hedgehog 3.

I may not remember buying this issue, but I remember what happened on the day I read it; it was the day of the Great Hermit Crab Attack.

I had a hermit crab named Clawful. Being a dumb kid, I hadn’t realized that, contrary to their misnomer, hermit crabs are actually very social creatures. My hermit crab lived an isolated existence, which can lead to aggression in the poor critters.

So, it’s no surprise that he pinched the shit out of my palm one day when I reached in to play with him. The little fucker pinched as he hard as he possibly could, and would not let go, despite how much I flailed my hand around like I was at a Pride parade.

My mom’s boyfriend at the time heard the commotion, rushed into my room, and flicked little Clawful right in his eyes, damaging one. Clawful let go of my palm after that, but I always felt guilty for making such a ruckus, because Clawful remained blind in one eye for the rest of his days. I made that poor hermit crab into an asshole. Rest in Peace, Clawful.

Condition of My Copy: It’s clawesome.