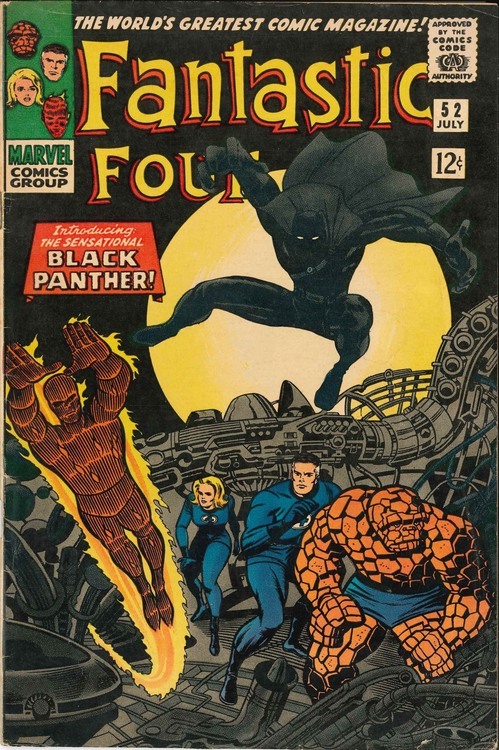 I bought this issue from a small and chaotic comic shop in Columbus, OH. I got it for a steal. The dude had it for sale for $40, and I haggled him down to $25. Now, I can’t consider myself a Fantastic Four fan (despite how badass I think Sue Storm is), but I had to have this issue because it features the first black superhero and one of my faves; the Black Panther!

I have spoken about race in comics a little before, but it is a wonderfully complicated subject and I wanted to bring it up again. It feels appropriate, especially since the news broke this morning revealing the cast for the new Fantastic Four movie, including a black Johnny Storm. If experience has taught me anything, it is that any minute now the internet will explode due to this casting choice. Get ready for a lot of “I’m not racist, but…” comments.

When I purchased this ish, I thanked the manager for selling it to me, and made mention of how much I loved the Black Panther and also how important of a role he has in comic book history.

“You mean because he’s black?” he said.

“Yeah, for starters,” I said. “He was a very groundbreaking character.”

“I can see that,” he agreed, “but you’re not just buying it out of white guilt, are you?”

I was taken aback by the question. I wasn’t used to someone being so forward and abrasive about race.

I explained, “No, it’s not that. I would genuinely like the character regardless of his race, but I also understand how important his race is to comics.”

“I think people make too big a deal of it,” said the manager (who is white). “I see lots of black guys come in here and buy comics with white characters. I don’t think the race of the characters really matters as much as everyone says it does. And I think it’s really white people saying it.”

“I mean, I think the white guilt has gotten out of hand. Now, the white guys who are trying not to be racist are trying to turn characters black. First Nick Fury, and then Spider-Man, and now they might even make Wonder Woman black.” (He was commenting on the Beyonce rumors from a few years ago.)

"Okay…” I paused, trying to decide if I wanted to keep the conversation going, thinking carefully for my next words. “But, don’t you think it’s a problem that the comics don’t accurately reflect the world we live in?”

He laughed. “They have super powers, oh my god, of course they don’t look like the real world. They’re fuggin’ comic books. And they keep changing ‘em to pander to appease the guilt, you know?”

I said, “Okay, let me say this, not saying that I totally agree with it, but I’ll say it. What if I said that the characters all being white is a mistake from our past, because they all came from a very racist period in our country? Isn’t changing the races of some characters now an effective way to fix that mistake, since a lot of them should have been different races in the first place?”

“What if they try, and those books don’t sell?”

“Then they should try again until they do,” he stated.

After that conversation, I could see multiple sides to the issue and, even now, I don’t have a definitive stance. Yes, I believe comics, like all media, should represent the diversity in our population, but I don’t know how to get there.

On one hand, I can understand the manager’s argument that Marvel and DC should stick to making original characters of different ethnic and religious backgrounds or sexual orientations rather than change those aspects of current characters. However, if those books don’t sell, which historically, they often don’t (the reasons why are arguable and ripe for further discussion), is it because they are not as good as the classics? Do they just not have the same weight? Are comic readers truly unwilling to read characters of such diversity? Or did those characters just kind of suck and the companies need to keep trying until they have some winners?

And is changing a current character to match a certain group just lazy pandering? Or is it a way to ensure that the representation takes, since they are attaching the change to characters who are already time-tested and with established fan-bases?

Or should we all just not give a shit about race, like the manager said? Are we making too big of a deal about it, when it really doesn’t matter? Should it matter at all if the Human Torch is black or white? I personally believe that identity and representation are important, but what do you think? Am I making too big of a deal over race just by asking these questions?

Within these pages is the first appearance of the Most Dangerous Man Alive, the Black Panther! The King of Wakanda lures the Fantastic Four into a trap in order to benevolently test their intelligence and abilities and see if they will be capable of assisting him in a dangerous task. But I think he did it just to show them from the get-go that he’s smarter and better at superheroing than Reed is.

This is also the only physical copy of a Fantastic Four book that I own.

Condition of My Copy: It has a history of suffering.