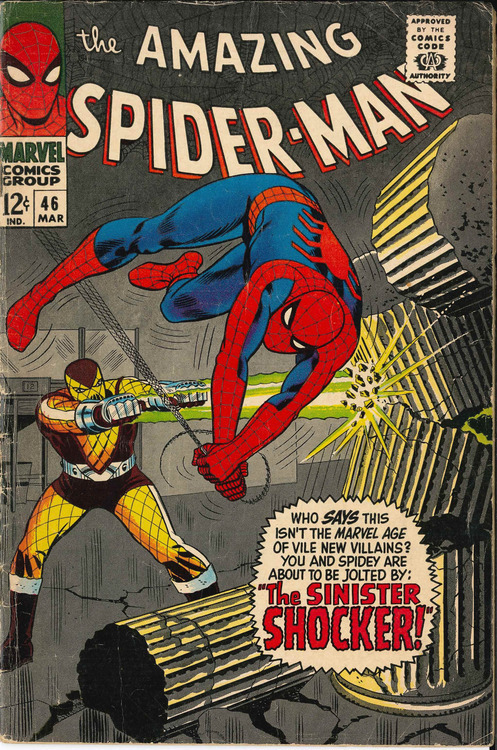 That pineapple-looking dude up there is the Shocker, and he is inexplicably one of my favorite Spider-Man villains (second favorite, to be exact). He’s called Shocker even though he doesn’t use electricity. Every time I see this comic, I think of Mick.

Mick was a fan of the “two in the pink, one in the stink” sexual concept known also as “the shocker” and it’s accompanying hand gesture. So when I got this comic for a steal from the comic shop I worked at during the time, I just had to show it to Mick. He thought it kicked ass that there was a comic book character with such a filthy name, so I painted him a picture of the Shocker doing the shocker using acrylic, because I did artsy things like that back then.

Hold on to your taint; this marks the first appearance of THE SHOCKER, with all the Silver Age Spidey goodness you could expect! I really can’t explain why Shocker is my second-favorite Spidey villain; maybe it’s his easily-distinguishable look or the fact that he’s strictly a professional villain who isn’t concerned with revenge against Spider-Man, which I find refreshing, but I just love him. You can currently find Shocker in the comedy title The Superior Foes of Spider-Man, which if you’re not reading, believe me, you are leading a sad and lonely existence.

Condition of My Copy: Rough around the edges, but shockingly intact.