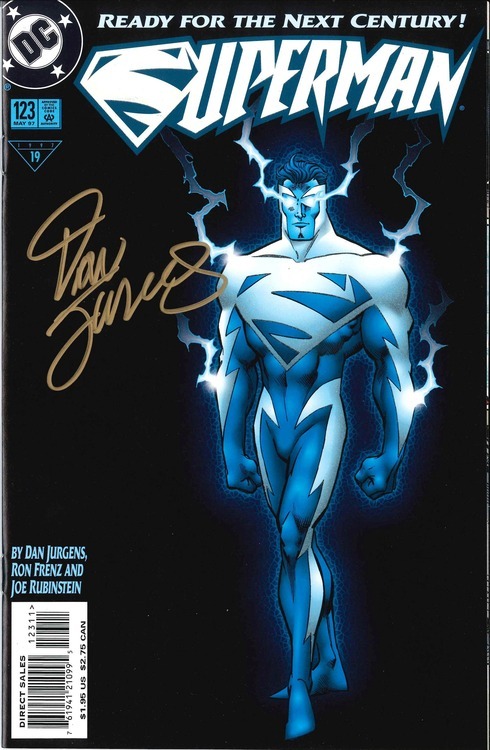 Supes is having some trouble controlling his new, energy-based power set that came to be after the sun disappeared and returned, but fortunately Lex Luthor’s wife shows up with a special material for containment suit makin’. The cover glows in the dark because ‘90s.

OMGosh, you guys remember when Superman got a new look? And not just, like, longer hair and bigger chest emblem, but, like, drastic new look? The whole world was waiting around to see how long it would last. Or maybe just I was.

Superman’s new look was a huge deal according to Wizard magazine. Even though we all knew this wasn’t permanent, it was still a lot of fun, and I even remember the national news networks reporting on the fans waiting for the original Superman to return. This is the second time from the ’90s i saw Superman make the news, the first being when he died that one time.

I remember reading this issue the same summer when I first joined the cross country team. I was heading into my first year of high school, and I had never…I mean NEVER…participated in a sport of any kind my entire life. No, I mean NEVER.

The thing is, the team took for granted how inexperienced I was that first day of practice. Everyone assumed that I would have at least a general, common-sense notion as to how a cross country practice would function, but I absolutely did not. So, when it came time for a half-mile warm up, meant to be an easy peezy sort of jog, I mistook it for time to do some hardcore running and took off like a flying squirrel out of hell.

And I looked back and saw that the other 20 or 30 or so members of the team were way behind me and laughing, giving each other inquisitive looks, wondering who the hell this idiot freak was going nuts on a warm up. It was humiliating. I ran the actual work out by myself that day (barely able to complete it). My first attempt at an extra-curricular sport was not off to a very good start.

I came home and read Superman issue 123 to escape my troubles and wished that I could remake my image as easily as Supes.

Condition of my Copy: Glowing.

[UPDATE] This issue is now signed by Dan Jurgens at C2E2!