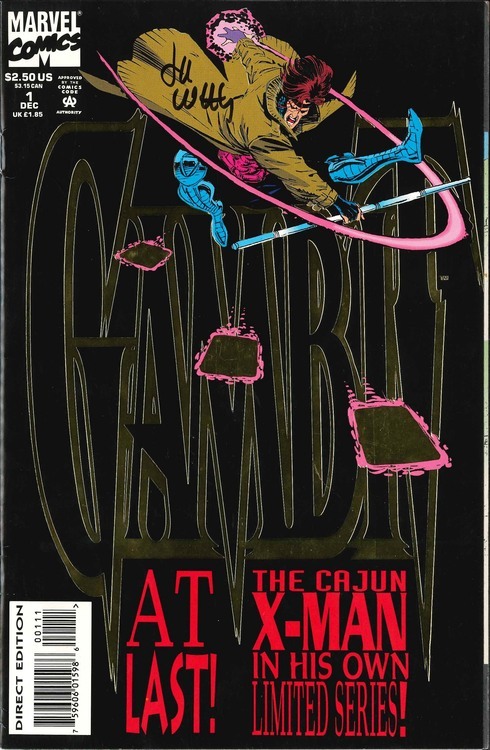 Ah this. THIS SHIT RIGHT HERE. This was the 90s. Nothing says “90s” more than Gambit and his inexplicable popularity that has since waned.

Gramma bought me this entire miniseries as a boxed set from Meijer, and I couldn’t wait to read it. Gambit was one of the my favorite X-Men at the time. He was so badass, with his exploding-card-flinging powers, and his smoking, and his inability to appear clean-shaven.

The first chance I had to read this was at the public pool. I used to be watched by a babysitter in the summertime named Linda, and she would often take us to the pool to wear us out in the afternoons. It was good for me to go to Linda’s and socialize, since I was a pretty awkward kid. On that day, though, I was in no mood for swimming or socializing or enganging in physically and mentally healthy activities, because I had new comics damnit!

There I sat in a chair, in the shade, eating Fun Dip, and reading Gambit when this thuggish looking older kid and his sidekick approached me.

“This is a pool, sissy,” he said. “Why are you sittin’ here readin’ dorky comic books?”

“Do I know you?” I said, intimidated.

“You a faggot or somethin’?” he asked, while his sidekick giggled.

Though I had not accepted or acknowledged my sexual orientation at that young age, I was still confused how he came to ask such a question. Were comics something that only faggots read? I simply said, “No.”

“Leave me alone, or I’ll go get my babysitter.”

“Oh!” he exclaimed in an exaggerated voice, facing his friend for validation. “Oh, no, don’t get your babysitter! Ooooo, I’m so scared! Little faggot’s gonna go get his babysitter!”

And with that he grabbed the three remaining issues of Gambit and tossed them in the air.

“Faggot!” he pointed at me.

Mustering any badassery I could, I tried to be like Gambit. However, Gambit I was not, and all I could do with my shakey voice was yell, “You’re just a stupid slut!” (I had heard that word from HBO and had absolutely zero idea what it meant.)

He came at me with his fists raised, when fortunately a pool manager shouted at him to stop. She was a petite woman but she had a stone-cold look that stopped him right in his tracks. Apparently, she had heard me scream the word “slut” and had come to handle the situation.

The kid and his sidekick were kicked out of the pool for a week, and Linda informed me that she would let the confrontation drop without discussion if I swore to never use a naughty word like that again.

I saw the kid about two weeks later at the pool again. He said, “I’m gonna get you back,” but he never did.

This is the Cajun X-Man’s first solo outing, and reveals much about his past, including his ties to the Thieves Guild and his former lover Belladonna. For a time, Gambit rivaled Wolverine in popularity, but now it seems that no one at Marvel has any idea what to do with him. Most recently he joined the All-New X-Factor title, so hopefully that’s a good fit.

Condition of My Copy: It’s in surprisingly good shape, despite being tossed around by that asshole bully. The dents and creases it did receive are part of its history, just like the artist’s autograph on the front from Wizard World Ohio. And I still think that is one of the most badass covers of all comics.