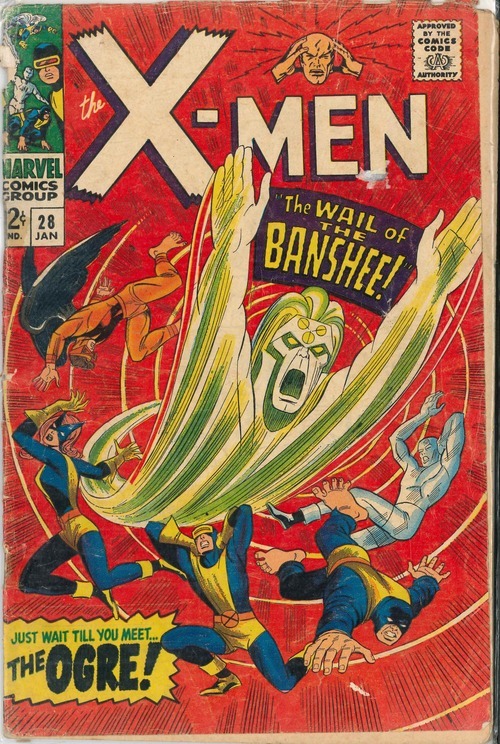 This comic I found for $1.00 at a garage sale. Gramma used to participate in a community-wide garage sale in her neighborhood, and it was always a fun weekend for me. I would sell my old toys to make a little extra money, and then usually spend the money immediately on something from someone else’s sale. I have never been very frugal, you see. During this particular weekend, I was selling a batch of hamsters. I had purchased a couple of Siberian dwarf hamsters at Meijer, and they did their rapid, little hamster-humpin’ and reproduced like, well, hamsters, so I decided to make a profit off the babies.

I managed to spend the little money I already made within the hour of making it on, I don’t know, He-Man toys or something. And then I found this, tattered and alone in a box. It was a box of comic books at this old man’s house that I was too late (damnit) getting to, since all the other comics had been purchased. This was the only one left, and clearly no one wanted it because of its worn appearance. Its cover was loose, it had rips and tears and yellowing pages throughout. What I saw, however, was a comic that had been loved. I rarely refer to old comics or books as being in poor condition, I prefer to think of them as loved.

I had to have it so I could love all over it, adding my own love juices. After all, it was X-Men, and X-Men was my comic! Unfortunately, because I had spent my money as if it were burning my pocket instead of being patient, I didn’t have the dollar to buy it. I raced back to Gramma’s, but she had already left for lunch and left my stupid cousin in her place. My stupid cousin was definitely not going to give me a dollar for a comic book. I realized that I still had something left in this sale to make a dime on; the baby hamsters.

My latent salesman skills kicked in like a mutant power, and after some persuading and sweet talk, I found a gentleman with a backwards ballcap and jeans so low you could see his underwear who offered to buy the whole cage of hamsters. He gave me $5 for the whole litter plus the extra cage, and I felt truly accomplished. Now, I would have enough for the X-Men comic with plenty to spare!

“Way to go. You got ripped off. You could have gotten way more than that. His food at the pet store usually costs like twenty or more for a package.”

And then I realized what my stupid cousin was saying. I had just sent those baby hamsters to their deaths. I had doomed them, condemned them to a slowly digested fate, all because I sold them to the first yutz that made an offer, all because I thought I needed a comic book.

Whenever I look upon this old X-Men issue, I will always remember the baby hamsters I sacrificed for it.

What’s Inside: This issue is the first appearance of Banshee, beginning a long tradition within the comic book industry of naming male characters “Banshee”, even though “Banshee” literally translates to “female spirit”. Banshee later died in a plane crash, and has not been missed since.

Condition of My Copy: Somebody’s been lovin’ on this thing since 1967, not just me.