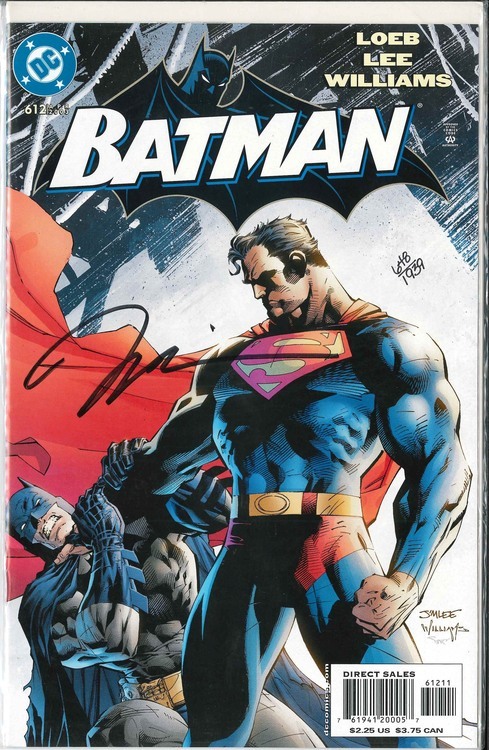 Lions, and Strippers, and Booze. Oh my:

I was working at a comic book store in college, where I ecstatically purchased this issue. I took it back to my dorm, intending to read it and find out who would win in the epic battle between Bats and Supes. Jeph Loeb had promised to settle the question, after all. But I got drunk instead.

The next day, my friend Matt and I travelled to a hog roast in his hometown of Danville, OH, which was the rural-ist of rural and right in the heart of Amish Country. There was a horse and buggy parked at the Save-A-Lot, that’s how rural.

The food was incredible, carved right off the hog, and the beer flowed like…beer, I guess. Folks were getting wasted and playing horseshoes as guitars (and maybe some banjos) played. Matt and I were blitzed by sunset, and my decision-making skills became inhibited. So, when some chick invited me to come along with her friends to another party, I agreed, without making arrangements with Matt about how, when, or where we would reunite. This was the age before ubiquitous cell phones, mind you. I still had a landline in my dorm room.

I don’t remember much of the other party, but eventually, after even more alcohol, including shots, I decided that it was time to return to the hog roast. Unfortunately, I had no idea where I was, and no one was capable of giving me a ride. So I began to walk (stumble) in the direction I hoped would lead me back. The night was cold and black; there is very little light pollution in Amish Country. Who knew? I walked for what seemed like endless hours, with no idea where I was, where I was going, or of the time. At one point, I found myself in some grass, and, suddenly, something leaped at me with a monstrous wail, teeth and claws bared. I bolted as fast as my drunk legs would carry me, not sure if whatever it was was going to follow me.

Oh fuck, I thought, I’m going to be mauled by a wild animal tonight, and I didn’t even get to read my comic. I’ll never know if Batman beat Superman!

I continued to run until breathless. Finally and miraculously, I happened upon the hog roast. It was completely silent and empty, save for a few tents. Folks had gone home long ago. Finding an empty tent, I collapsed.

In the morning, I had a hangover to rival Margot Kidder. The animal that I ran from…it must have been a drunken hallucination. An older fellow, with unwashed, long hair, greasy skin, and no shirt, appeared from one of the tents and saw the distressed look on my face. I explained, like a child in a mall, that I was lost. I had no money and no phone.

“My girlfriend’s comin’ to pick me up. If you can remember the name of your friend, we can look in the phone book, find the address, and take you there,” he offered. Ah, the kindness of strangers. He later informed me that he was a stripper, though I couldn’t imagine how.

I was so grateful, of course I accepted. The problem was, the address in the phone book was listed under Matt’s parents’ names, not his. I saw the names “Bill and Tamara” and I remembered that was them, for sure! And we were on our way. After almost an hour of driving, we arrived at the address and I was mortified to realize that it was not the right house. I looked again in the phone book, and saw that, oh shit, maybe it was THIS address instead, and not “Bill and Tamara’s”.

“That’s halfway across the fucking county!” he shouted in fury regarding the new address, the stench of his breath pummeling my face.

I apologized profusely. But the look in his eyes said, “Murder.”

Oh no, I thought, I’m going to die. He is going to kill me and rape me, in that order, and leave me in the woods, and I didn’t even get to read my comic. I’ll never know if Batman beat Superman!

His girlfriend calmed him and offered to take me to the correct address. Along the way, we sat in silence, until he turned around and handed me a note. It was an apology for his temper in the form of a poem. I wish I had kept it.

I knocked on the door upon arriving at the new destination and was relieved beyond words to see Matt answer. I could have kissed him. I narrated the morning’s and night’s events; the angry stripper, how I worried I would never read my comic, and my hallucination about the wild animal.

“Oh,” Matt said, “there’s this old man that keeps lions and cougars and stuff. You must have wondered into his yard.”

I was grateful to be alive and to return to civilization, where people kept housecats not cougars, where male strippers were hot and not greasy, where people ate store-bought ham instead of off the hog, and where I could read my goddamn comic book.

Batman must find a way to defeat his ally, Superman, who is under Poison Ivy’s control. For the record; Batman cheats.

Condition of My Copy: Since I bought it already autographed by Jim Lee, I only touched it just that one time. Just a little bit. Nothing too serious. Just the tip…