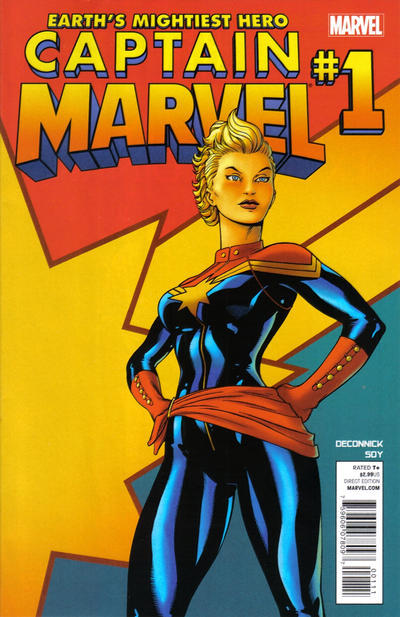 Back in the Saddle:

For my second post, I wanted to describe how my love for comic books was recently reignited. It’s all thanks to that comic up there. See, beginning with my junior year of college, I stopped collecting comics due to budget concerns. Oh, I would read them, sure, because libraries are awesome places and that’s why I work at one. But the stories just weren’t interesting enough for me to shell out $3-$4 an issue each month. I just didn’t care. Civil War? Meh. Brand New Day? Meh. Blacket Night? Meh. Worth a read, but not worth owning.

In the summer of 2012, my friend Joe sent me a link on Facebook informing me that “They’re making Carol Danvers the new Captain Marvel.” I love Carol Danvers, previously known as Ms. Marvel. I can relate to her in many ways. In her decades-old history, Carol has been through a lot. She has been violated, betrayed, taken for granted, and shat upon by the fictional characters surrounding her in her own universe and by the creators and publisher here in the real world. Yet despite it all, there she was on the image of that cover, with a new name, a new costume, her fists on her hips, standing heroic and proud, and heading in a new direction, as indicated by the big ol’ “#1”. That is a very powerful message for me thematically. She was finally getting the A-List treatment and respect she deserved. Carol was getting a reboot.

That was the same summer I had rebooted my own life, in a way. I had moved into a new apartment (first time that I could consider a home to be truly “mine”) to be closer and more dedicated to the job I love, hopefuly turning it into a career. I was taking a new class to earn my master’s degree, meeting new people, and that was the summer I ran my first 5k since high school. I had finally taken an interest in my health, and, thanks to a couch-to-5k program, I went from being an overweight slob to being an overweight slob who can run 3.1 miles.

It’s strange, but I had Carol in my head, with her bright new costume, as inspiration through the race. So, when that first issue was released, I couldn’t wait for a trade at the library, I had to have it. And I had to have every issue (plus variants) since, thanks to careful budgeting. Now, I have discovered all kinds of new and exciting reads, as well as revisiting some old loves, and I have Captain Marvel to thank for bringing me back into the fold.

Carol Danvers, with a new cotume, weighs the pros and cons of adopting the Captain Marvel name over Ms. Marvel and what that would mean for her identity. The writer tells a story of self-reflection, an inspired and different method of presenting a first issue, rather than the usual action-packed cliffhanger.

Condition of My Copy: Gently caressed