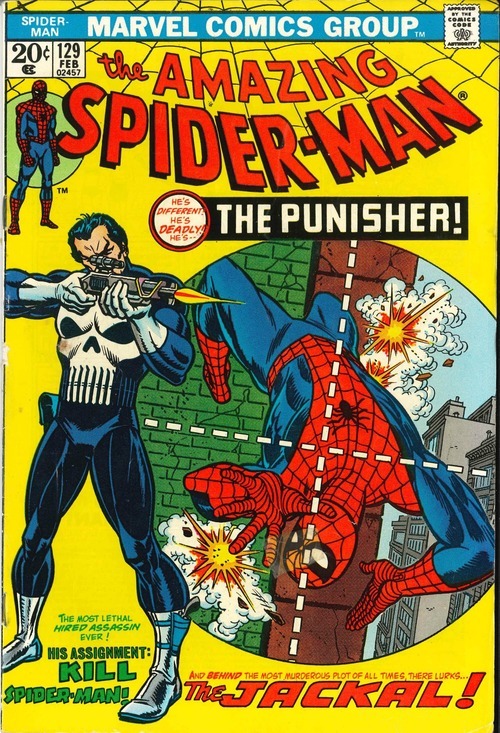 The Punisher makes his (not so) bloody debut! Dazzle at the beauty of the simple 1970s when characters could deliver entire monologues in the time it takes to deliver a punch.

The Jackal also makes his first appearance in this issue and fools the Punisher, a brutal, trigger-happy vigilante whose passion for killing criminals is outmatched only by the size of his eyebrows, into eighty-sixing Spidey for the “murder” of Norman Osborn. Punisher fires a rocket at Spidey, who makes certain beforehand the building he is in front of when he dodges the rocket is abandoned, lest the readers be traumatized by the harsh realities of collateral damage. Engaging the Punisher in hand-to-hand combat, the Jackal fears the Punisher will lose and tries to help out by slicing Spidey across the head.

Punisher and Jackal then get into a spat about the “right” way to kill someone, a creedo the Punisher character will totally lose in the future. Jackal turns on the Punisher, attempting to frame him, and Spidey helps him see the error of his ways after another tussle. Realizing the Jackal was using him, Punisher disappears, pouting and feeling sorry for himself. Vigilantes, amirite? i 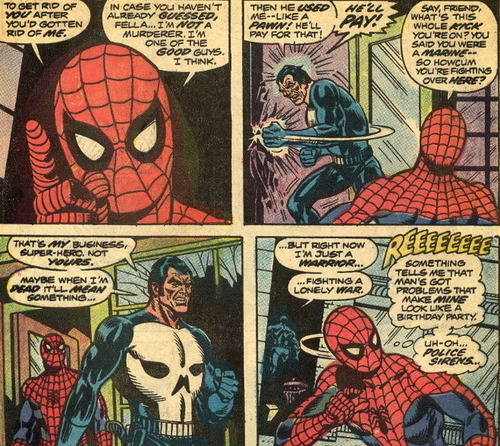 Meanwhile, Harry Osborn is totally losing his shit as he decides to become the new Green Goblin.

It’s the Punisher’s first appearance, so of course I kept it. He’s one of my favorite characters. This issue laid the groundwork for a multi-faceted Marvel era; it helped bring us into the violence-riddled, dark and gritty, bad boy-obsessed period of the ‘80s and ‘90s and it introduced a pivotal piece for the worst period for Spider-Man (Clone Saga).

I acquired this issue while I worked at a comic book store, and I maybe sorta kinda but-not-really stole it. I mean, I paid for it, but I maybe rang it up for dirt cheap. It was my last week at that shop and they had really been pissing me off and treating me like shit for a while, so I rang this comic up and sold it to myself during my shift for $5. I committed a justified crime, just the like the Punisher. I’m kind of a hero really. That’s what the Punisher would say, anyway. Oh wait, he wouldn’t? He’s a complete psycho who would shoot me for committing such a petty crime, thereby committing a crime, and not giving a shit? I guess I simply committed a crime then and there is no justification whatsoever. I was young, though, so…sorry not sorry.

Condition of My Copy: Some frilled on the spine, some staining, and a piece of adhesive on the cover which I can’t remove without causing further damage. But it was autographed by Gerry Conway on the inside by writer Gerry Conway at the 2014 Detroit Comic Con. See: 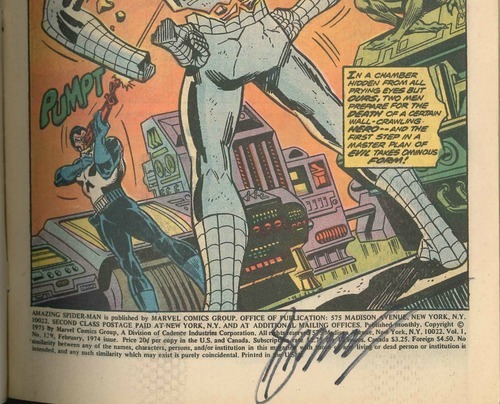 Favorite Ad: “I Can Make You a New Man” 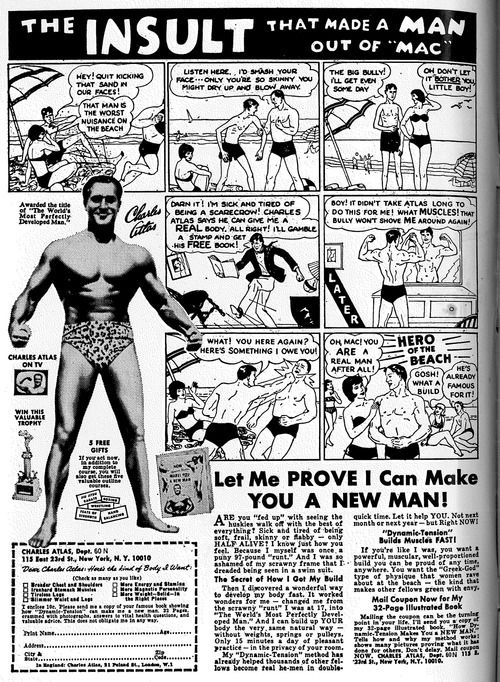 See Also: My Comic Book Memory of Catwoman #2 for one of the reasons that comic shop sucked.