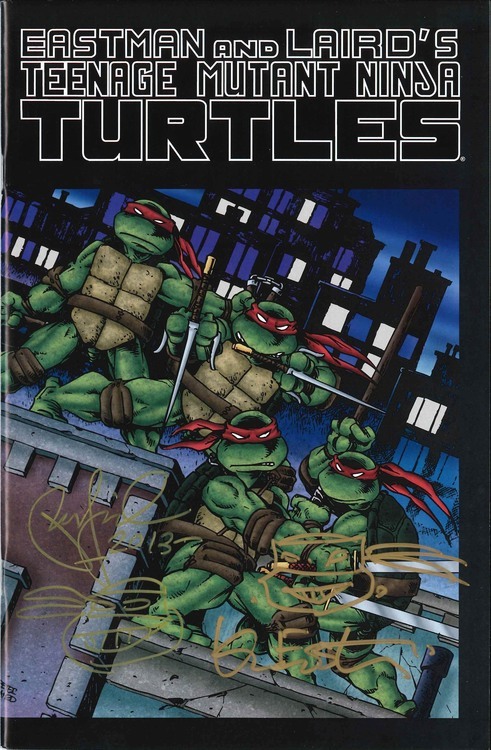 We are introduced to four anthropomorphic, weapons-wielding, martial-arts-trained reptiles, in all their black and white glory. Together, with their mentor Splinter, they yell “Damn!” and kill their archenemy, the Shredder, upon first meeting.

This is a colorized reprint of the original TMNT #1 that was released by Mirage Studios as a farewell before the franchise was sold to Nickelodeon. This story is what started the whole craze and represents the childhood of an entire generation of Gen Xers or Yers or whatever the hell we are. The Turtles are introduced, far more brutally than the cartoon, their origins revealed, and they totally kill the Shredder. The black parody is apparent throughout, and, though its tongue-in-cheek, absurdist traits have since been lost in other incarnations, this comic is still genuinely entertaining.

I chose this comic for today’s Comic Book Memory because of the reveal of the Ninja Turtles new look for the upcoming Michael Bay movie. Now this comic…THIS COMIC RIGHT HERE…reminds me of having my own book published. In June of 2013, my book had its first release from the publisher. Even though it was a small release from a small publisher, I have never been more proud of myself. So, that month, I decided that I deserved a treat!

So, I ordered this comic from Ebay, already autographed. I don’t normally like purchasing items that are autographed, I prefer to wait in line at a convention and get the autograph, so I have the memories (hola!) to go with it. But this was a special case during a special month, so I decided to spoil myself. And what makes it even better, is that the other creator will soon be coming to Ohio for a small convention. So I will indeed get my chance to create memories for this comic by standing in line at a convention.

Until then, this comic will hang proudly from my wall in a frame, as testimony that I deserved it for accomplishing an achievement. I can also relate to this comic and see it as inspirational. Eastman and Laird started off small, self-published, actually, much like I am starting off small with a self-publisher. But with a lot of work and passion, they created a phenomenon.

Condition of My Copy: The previous owner kept this little gem very well-protected. It is autographed and doodled on the front cover by Peter Laird. It has no COE, but I’m pretty sure it’s him. Even if it isn’t, I don’t care, because soon enough I’ll have Kevin Eastman’s autograph on it as well!

[UPDATE] This issue is now signed by Peter Laird AND Kevin Eastman (see picture) thanks to the Gem City Comic Con!