HELLO FROM C2E2, EVERYBODY, THE WINDY CITY’S BEST COMIC CONVENTION, OR AT LEAST I’M TOLD! 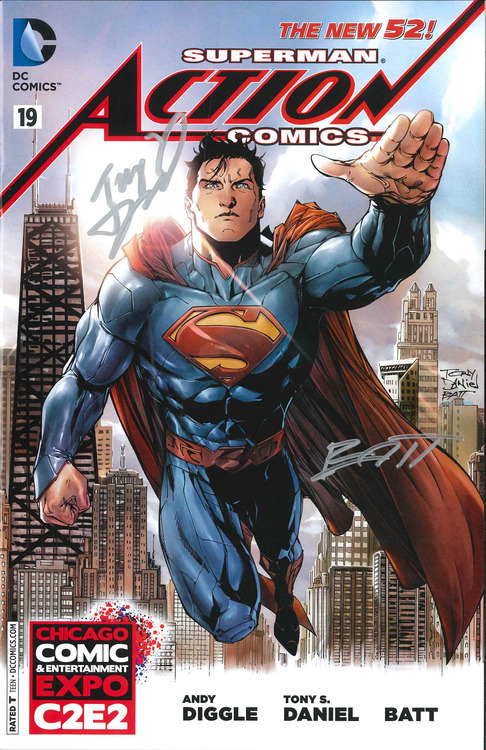 While on assignment in Qurac (I LOVE comic book fictional countries), Lois and Clark’s flirtations are interrupted, as Clark is forced to battle a group of war machines being smuggled into the war-torn country as Superman. He then discovers one of the machines’ pilots bears Jimmy Olsen’s face just before the pilot suicides himself.

Poor Grant Morrison. He comes in, goes crazy on comic characters, turning everything about a series on its head, and then the next writer comes in and feels obligated to change it all because…they’re not Grant Morrison and only Grant Morrison can make that shit work.

But Andy Diggle started off strong here, in my opinion. I really enjoyed this issue and his run on this book. I did not have to think as much as I did with the Morrison issues before it, not because Andy Diggle’s story isn’t as intelligent, it’s just…well…read some Grant Morrison and you’ll see what I mean. The guy is just weird with super heroes. I like it, but weird. I got this issue to see how DIggle would do, having to follow such a strange voice.

My only beef with this issue (and “The New 52” in general) is the timeline is wonky and confusing. When DC did a “soft reboot” (neat idea worth trying, but there were consequences), they rebooted all of their comics and established a new continuity that was (in universe) five years old. If that sounds confusing to you, it’s because it is. Rather than start over completely with new origins, like the previous reboot of the 80s, “The New 52” kept two or three Superman titles going at the same time, with one telling an altered origin and the other set in the modern day. That method doesn’t mesh with continuity. At all. This story supposedly takes place four years after Morrison’s run, but before the other Superman comic.

Well, I’m here again for another C2E2, so let’s do a C2E2 memory. This time last year at this convention, I stumbled upon this kick-ass C2E2 exclusive variant from a vendor called Graphiti (P.S. – their variants are lame this year).

I found the artist Tony Daniel’s booth, hoping he would sign it, but found two guys sitting there talking. I wasn’t sure which one was Tony Daniel, and I also wasn’t sure if I should interrupt their conversation, but I decided to do so. Turns out I shouldn’t have. I waited patiently near their booth until one of them acknowledged me.

He glared at me and said, “No. I saw you earlier at my booth when you got my autograph.”

“Oh,” I said timidly, turning to the other one. “Are you Tony Daniel?”

He claimed the identity and offered his hand to take the books. As he signed them, the glares from his companion were unceasing, like heat vision slicing through me, cauterizing the damage. Hunty was throwin’ me some shade, is what I’m trying to say here.

I got the books signed, so, yay, win = me, but I still felt bad for pissing the other guy off. I have always been terrible with faces, and I know that I offended him by not remembering seeing him earlier and probably for interrupting his conversation. Honestly, there’s nothing I can do differently with the faces thing, but now I try to swing around and come back later if I see a creator talking to someone else at a convention.

Condition of My Copy: Autographed by Tony Daniel (despite some shade) and the inker, Matt Banning, who goes by BATT professionally it seems.

See Also: My memory of The Amazing Spider-Man #30 for more C2E2 reminiscing.